Faridkot: Family members of Shaheed Gurjeet Singh Sarawan, who was killed in Punjab police firing on Oct. 14 at Behbal Kalan village, have announced to take hard steps if the government fails to release Sikh protesters who were detained on November 17 from Sarawan village during Sukhbir Badal’s visit.

The family members of Bhai Gurjeet Singh have demanded the unconditional release of the arrested persons, residents of many villages and the family of deceased Gurjeet Singh of Sarawan saying that “the police act of arresting peaceful protesters during Sukhbir Badal’s visit to our house on November 17 at Sarawan was unjustified”. 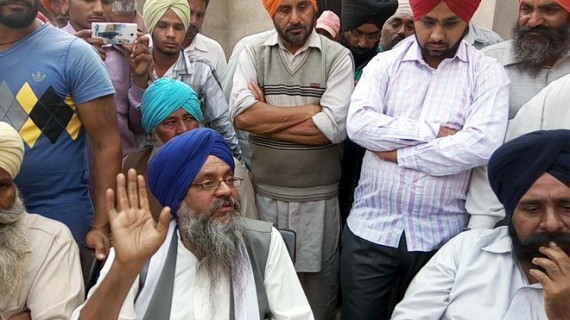 In a memorandum submitted to Deputy Commissioner Faridkot today, the family members and relatives of Gurjeet Singh threatened to immolate themselves in front of the DC office on November 21 if the arrested persons were not released unconditionally.

“Arresting those who supported the family in demanding action against police personnel who had opened fire on Gurjeet Singh is highly deplorable, said Sadhu Singh, Bhai Gurjeet Singh’s father.

Sukhbir visited the families of Bhai Gurjeet Singh Sarawan and Bhai Krishan Bhagwan Singh Niamiwala on November 17- more than a month after the firing incident.