Chandigarh: In a detailed video interview with journalist Kanwar Sandhu, former Punjab cop Gurmeet Pinky disclosed the details of elimination of Bhai Balwinder Singh Jatana’s family. Gurmeet Pinky said that Sumedh Saini was SSP of Chandigarh at that time and he (Gurmeet Pinky) used to spend most of his time in Chandigarh even though he was still officially posted in Lud­hiana. On August 9, 1991, Sumedh Saini was returning after lunch when there was a bomb attack.

Three persons were killed, and the SSP was among those injured in this blast. 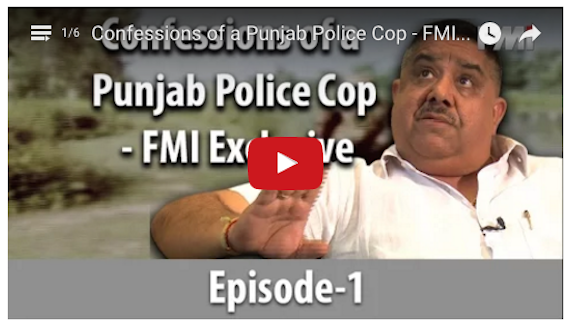 Gurmeet Pinky said that when he went to see Sumedh Saini at the PGI, Sumedh Saini broke down and swore revenge. In chaste Punjabi, he told him “apan chadna nahin” (we will not spare them).

Kanwar Sandhu in a detailed write-up title “Confessions of A Killer Cop” published in Outlook (a weekly magazine) noted that: “Four members of the Jatana family—aged 80 years, 40 years, 13 years, and an infant—were killed and set on fire. No one is willing to talk about it even now, except to say that it happened at about 2.30 in the night”.

Gurmeet Pinky, in his interview, said that Balwinder Singh Jatana and Charanjit Singh Channa were killed later on September 4, 1991, in an encounter at Saidpur in Patiala. The attack on Saini, it later turned out, had in fact been carried out by another outfit, Khalistan Liberation Force, and the Jatanas had no role in it.

Gurmeet Pinky said that Sumedh Saini had initially assigned him the task to carry out massacre of the Jatana family but the task was later carried by — . He told Saini he would have to procure weapons for the task from Ludhiana, where he was posted. Pinky left for Ludhiana soon after, only to discover that the deed had been done by the time he was returning to Chandigarh.

Gurmeet Pinky said that the massacre at Jatana village was carried out by Ajit Poohla. He said that Poohla had narrated him the whole sequence of events when he was lodged in the same cell in Central Jail Ludhiana.

Kanwar Sandhu in his write-up, published by the Outlook, notes that Sumedh Saini’s vengeance, however, went on. Channa’s brother Bal­winder Singh, a head constable himself, was killed by a gun-wielding motorcyclist at about the same time.

“While this was given out to be the res­ult of gang warfare, it was the handiwork of the police on ins­t­ructions from seniors,” Pinky claims. Satpal Channa, a third brother, says Balwinder had gone to the market when he was shot.

“His killing has remained a mystery all these years,” he says.

Pinky remembers how the Jatana village incident kicked up a huge row within the police. Muhammad Mustafa, the then SSP Ropar wrote to the then DGP, D.S. Mangat, alleging that SSP Saini was behind the dastardly elimination of the family. It was rightly suspected that Poohla or Pinky were behind the killing.

“Lest we were arr­ested and the plot unravelled, Poohla was informally detained in Jalandhar and I in Chandigarh Police Lines in Sector 26 for many weeks,” says Pinky. “It was only when K.P.S. Gill replaced Mangat as DGP that we were ‘released’ from custody.”