Srinagar: Jammu and Kashmir authorities must prohibit the use of pellet-firing shotguns in policing demonstrations, as they are inherently inaccurate and indiscriminate, Amnesty International India said today.

Police in the state have used pellet shotguns for a number of years. Several cases have been reported of people suffering serious injuries, particularly eye injuries, as a result. Recently, on 21 May 2015, 16-year-old Hamid Nazir Bhat was shot by police firing a pellet gun in Palhalan, Jammu and Kashmir. He lost vision in one eye.

“The police have a duty to protect lives and safety and prevent violent crime. However in carrying out this duty they must as far as possible use non-violent means,” said Shemeer Babu, Programmes Director at Amnesty International India. “When the use of force is unavoidable because of compelling reasons, it should be only what is strictly necessary and to the extent required.” 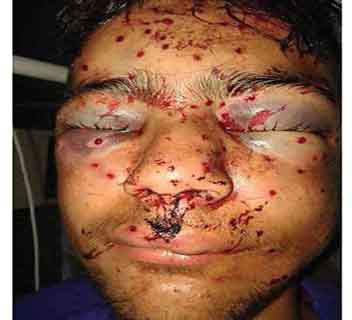 “In policing protests, the police must also distinguish between persons engaging in violence and peaceful demonstrators or bystanders. Any force used should be only against those acting violently, and the police should always ensure that non-involved persons are protected from injury.

“When the police are trying to contain violent persons, it is important that they focus any use of force accurately at those individuals. However, pellet guns cannot ensure well-targeted shots and risk causing serious injury, including to bystanders or other protesters not engaging in violence. These risks are almost impossible to control.”

“Because of this high potential to cause unwarranted injury, including to bystanders and others, pellet guns should have no place in law enforcement.”

Javaid Gillani, the Inspector General of the Jammu and Kashmir police, told Amnesty International India that the state police are instructed to use pellet guns only when protests go out of control. “There is a standard operating procedure that is followed in such situations, and police fire the pellet guns from a safe distance”, he said. However the Inspector General acknowledged that the pellets, when fired, do not have a predictable trajectory.

Sajad Khanday, a doctor at the department of ophthalmology at Government Medical College, Srinagar told Amnesty International India that he had come across several cases of serious pellet injuries in the past few years. “The pellets can cause blindness and disfigurement of the eyes”, he said.

“The use of pellet guns is not in line with international standards on the use of force. The objectives of the police should be achieved in a less harmful way with other devices which can be more accurately aimed, and where the risk of harm can be better controlled,” said Shemeer Babu.