A handful of corrupt people have made the entire system corrupt: Arvind Kejriwal

Chandigarh: Vowing that Aam Aadmi Party (AAP) has adopted zero tolerance approach against the corruption, Delhi Chief Minister Arvind Kejriwal today said that a handful of corrupt people have made the entire system corrupt, which needed a ‘broom’ to get it cleaned.

“Although majority of citizens of the country are honest, but a few corrupt people have ruined the system of largest democracy of world. To revamp the system God has given us ‘broom’ to clean it. Enough is enough, we have to stand up against corruption”, Kejriwal said while addressing the gathering of lawyers in a function organised by Bar Council of Punjab & Haryana to distribute licenses to newly appointed advocates on April 28. 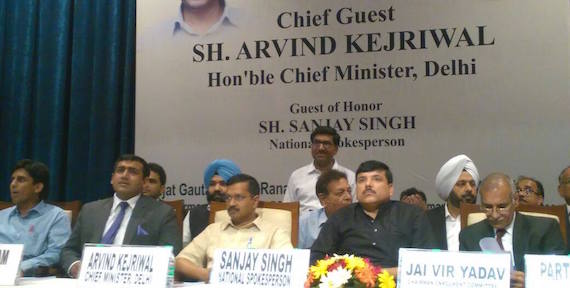 “Law is a noble profession, as an ‘Aam Aadmi’ (Commanman) can tolerate anything but not injustice”, Kejriwal, who was the Chief Guest at the function, added.

Appealing people to repeat the ‘victory of Delhi’ in Punjab, Kejriwal claimed that in spite of acute odd conditions in Delhi, AAP Government succeeded to win faith and confidence of people and if re-poll is conducted today, the three seats, which went to BJP Delhi, would also be won by Aam Aadmi Party.

“We have witnessed a revolution for change in entire India and if it continues, nobody will be able to stop, which is God’s creation”, Kejriwal said.

Without naming Shiromani Akali Dal (SAD), BJP or Congress, Kejriwal said “We, through India Again Corruption, demanded strong Lokpal in the country, but politicians dared us to enter political battle to get the Lokpal, as needed by nation. Commonmen like us never even thought of contesting poll, but we accepted the challenge and result is in front of all. Had they given us the strong Lok Pal, they would have avoided their humiliating defeat in Delhi.”

Unveiling the working of the AAP Government in Delhi, Kejriwal said “We have emphasises on Education and Health Sectory, as we know that an educated and healthy citizen is an asset in nation building to achieve new height of developed India”.

“We have changed the faces of Government schools, Mohalla Clinics opened by Delhi Government are being praised not only in India but in US too”, Kejriwal said that the Odd-Even formula is being appreciated by public to save environment and now China is adopting the same formula.

Expressing concern over the poor plight of farmers of Punjab, who are being forced to take extreme step of suicide, Kejriwal said in case of natural calamity in Delhi, AAP Government provided them more compensation per acre than demanded by them.

In Delhi, AAP Government is facing tough challenges and hindrances by Union Government and in spite of not having any control on anti-corruption wing, corruption has drastically decreased, Kejriwal said adding that in Punjab, there would not be any ‘hurdles’ and if voted to power, would not only curb the drug menace, agriculture policies would be chalked in such manner that no farmer would be forced to take the extreme step of suicide.

“We have no money to contest election and I know, if people make up their mind for political change, not money works, which was also in case of Delhi too”, he added.