There has been a lot of discussion in Sikh/Punjabi circles including electronic media about the recent visit of Mr. Harjit Singh Sajan, who is the Canadian defense minister, to India and Punjab. This discussion has been largely focused on the comments made by the newly elected chief minister of Punjab Captain Amarinder Singh. Mr. Amarinder Singh during a question and answer session with a private TV channel while answering a question posed by the interviewer Shekhar Gupta, made a remark that he would refuse to meet with Mr. Sajjan during his visit as “he is a Khalistani”. He then went n to say that Mr. Sajjan’s father was a member of World Sikh Organization which per him is a “Khalistan organization”. He then further said that in fact per him, all the 5 Sikh ministers in the current Justin Trudeau government are “Khalistanis”.

Most of the media, print as well as electronic, discussion around this comment has been to either to figure out the merits/demerits of this comment. There has been a limited discussion in trying to understand the reason for Mr. Amarinder Singh making these comments which from a Punjabi and especially Sikh perspective are seemingly somewhat self-harming for a politician who wants to command the following of Punjabi’s if not Sikhs. Some of the reasons given out are simplistic and seem childish for a seasoned and shrewd politician. One of which is that Amarinder is possibly reacting to personal shame and animus that he was subject to by the diaspora community when he was visiting Canada prior to elections to garner their support. Another more viable reason given in the media by some analysts is that he is reacting to the recent resolution passed by the Ontario provincial assembly, declaring the killing of Sikhs in India following Indra Gandhi’s assassination in 1984 as a “Genocide”. Although there might be some merit to both these theories it seems there is a bigger geopolitical reason at play here and this doesn’t seem to be an off cuff the remark by an individual chief minister as is being portrayed. 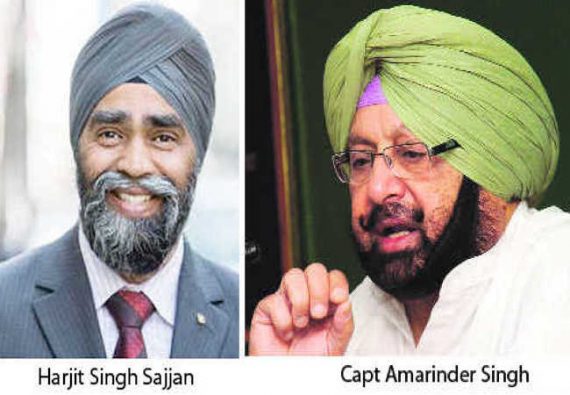 Let’s consider the setting in which remark was made to understand the context. The question was posed by Shekhar Gupta in front of New Delhi’s intelligentsia including politicians, media bigwigs, ex-military, and industrialists. Shekhar Gupta has a long history of anti-Sikh views shaped by his years of covering Punjab when he was working for Indian express. The reader is welcome to go through years of his reporting to understand these views. The way the question was framed almost felt like Gupta was prompting Amrinder to make these remarks. Why would Gupta do so? To understand this, we might have to understand the recent Punjab politics especially the somewhat surprising and per some circles rather unprecedented and unexpected victory of Congress in the recent Punjab elections. It was widely conjectured in the media and elsewhere that Aam Aadmi Party (AAP) was going to win the election and that too with the wide margin. Besides many factors pushing AAP towards this victory was the rather strong support that AAP was getting from Sikh diaspora especially from Canada. This diaspora if not vocally pro-Khalistan is at least visibly more traditionally “Sikh looking”. Shekhar Gupta in one of the TV shows analyzing the election results had himself made a comment about the “Khuli Dadi’s; Flowing Beard men from Canada coming out in support of AAP”. His analysis was that one of the reasons Congress ended up winning was that the “Hindus” of Punjab got spooked by the presence of this overt Sikh support, as it reminded them of 1984 and times following that. They ended up voting in mass for Congress. I tend to agree with this analysis of his, except that I think that the solidification of Hindu vote did not all quite organically as Gupta made it out to be but was rather facilitated by the state machinery including the intelligence agencies both at the state and center level. It would be quite understandable for the state to be worried about this influx of elements with independent ideologies into an environment which they for the past 20 years have worked so hard to “sanitize” using all the elements of statecraft. More than these independent thinking Sikhs coming and going they are rather more worried about the fact that the support the AAP was getting showed that the independent spirit in the local Sikh population of Punjab had not died completely even after the state having tried everything over the past 20- 30 years. Even though the local Sikh spirit overtly seems to have been brought to its knees by the state, this support for AAP even though mistakenly so, represents to the Indian state that the independent Sikh Spirit has not completely died and has the potential of lighting up again if exposed to the free and independent spirit of diaspora Sikhs. That is what Harjit Sajan represents, a free thinking independent Sikh who is not influenced by the Indian state. He represents for Indian state the potential of Sikhs to start thinking on their own, which could at some point lead to them asking for their rights. That is some thinking the Indian state cannot allow. That is why the state needs to humiliate Harjit Sajan or rather humiliate the Sikh spirit that he represents. They need to show to the Indian Sikhs that their brethren in the diaspora are not any more respectable to the Indian state even if they rise to the top. What better way to show that, than having the chief minister who seemingly represents Punjab refusing a meeting with him? They are showing Harjit Sajan and through him the “Sikhs” their place. Amarinder Singh when saying all those things to Shekhar Gupta about Harjit Sajan was thus only following the script of what the Indian state wanted him to say.

PS: I am not an AAP supporter and am rather of the view that AAP also represented the Indian state but in this context, AAP became a carrier of hidden independent Sikh spirit. This spirit or rather the fact that it is still there is what spooked the Indian state – Hardeep Singh.