Chandigarh: India’s Minister for Food Processing Industries and Shiromani Akali Dal (Badal) leader Harsimrat Badal today hailed the passage of Sehajdhari bill by the Lok Sabha. She alleged that the Aam Aadmi Party and Congress have conspired to weaken the Sikh community over the Sehajdhari issue by opposing its passage had exposed their alleged joint anti-Sikh and anti-Punjab stance.

Terming the passage of the amendment bill as a historical day, Harsimrat Badal said both Houses of Parliament had righted a wrong by passing this amendment and respected the sentiments of the Sikh community on this sensitive issue. 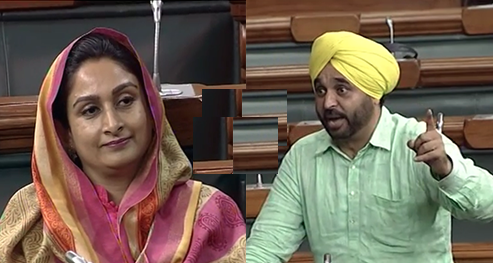 Criticising the Congress and AAP for opposing this bill in the lower house through its MPs Choudhary Santokh Singh, Ravneet Singh Bittu and Bhagwant Singh Maan, she said the manner in which both parties had collaborated with each other to make a counter strategy against the SAD was reflective of the strategy adopted by them in Bihar.

She said the very fact that the AAP party had also decided to take an anti-Sikh stand and go against the sentiments of the Sikh community worldwide had exposed it completely.