Kurukshetra, Haryana (August 3, 2014): A day after their efforts of takeover of Gurdwara Sahib Patchhahi Chhevin could not bore fruits, Sikh supporters of the Haryana Sikh Gurdwara Prabhandak Committee (HSGPC) sat on indefinite “Dharna” outside the Gurdwara Sahib.

They blocked Kurukshetra-Patiala main highway last night but vacated the road finding that general public was suffering due to blockage. 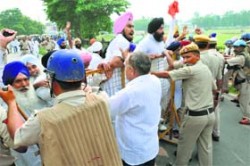 Giani Gurbachan Singh said both groups – the HSGPC, and the SGPC – must maintain restraint while the Akal Takht is finding an amicable solution to the problem.

But he expressed his firmness over the controversial decision excommunicating Jagdish Singh Jhinda and two others from the Sikh Panth for their role in formation of HSGPC.

The HSGPC leadership now wants the establish its headquarters at Gurdwara Chhevin Patshahi. They said that they would not resort to any “wrongful method”, added that Sikhs of Haryana were “ready for any step, if forced by those occupying the Gurdwara Sahibs”.

Security task force members of the SGPC locked the gates and, equipped with their swords and spears, were gathered in large number inside.

It may be mentioned here that a group of 50-odd supporters started a march towards Gurdwara Sahib Chhevin Patshahi yesterday. They were stopped a few yards away from the Gurdwara Sahib by the police. Jagdish Singh Jhinda and Didar Singh Nalwi joined them later.

Strategy lapses were visible with in HSGPC leadership as it’s general secretary Joga Singh said they would not move away without taking over the management of Kurkshetra Gurdwara Sahib, while HSGPC President Jagdish Singh Jhinda stressed that there would be no use of force.

Jagdish Singh Jhinda repeatedly appealed to supporters not to take any hasty decision. It was opined that a forcible takeover would invite negative response.

In 2009, a group of Sikhs led by Jhinda had forcibly taken over the Gurdwara Sahib. It turned out to be a drama as Jhinda announced that it was a symbolic step to prove strength. Later, the Akal Takht even awarded “tankhah” to Jhinda and others.