Chicago, IL: In a recent update, a US based civil rights group, the Sikh Coalition, said that the Chicago interfaith leaders, public officials and over one hundred local community members joined the Sikh Coalition for a press conference in Darien, IL on Sept. 15 morning in support of recent hate crime victim, Inderjit Singh Mukker. The sangat’s partnership and support was invaluable in seeking justice for Mr. Mukker.

“The United States is my country. I am an American – and no American, no person should be judged or attacked because of the color of their skin or their religion,” said Mr. Mukker at the press conference this morning. 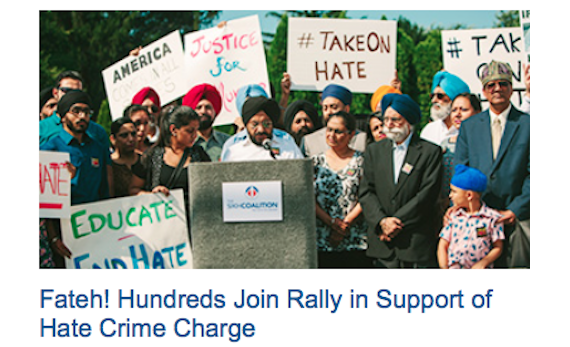 “We are thankful that Robert Berlin and the DuPage County State’s Attorney’s Office have filed a hate crime charge in this case,” said the Sikh Coalition’s Legal Director, Harsimran Kaur. “For the Sikh American community, the goal in obtaining a formal hate crime charge is not to seek a harsher penalty, but to instead prosecute the crime for what it was. We can’t combat the problem of hatred against minority communities in America unless our elected officials and government agencies acknowledge that the problem exists.”

As per release the Sikh Coalition had immediately launched a petition on Change.org urging for federal action, increased the media scrutiny and quickly flew additional colleagues into Chicago to begin organizing a press conference with local community leaders. By Monday morning there were 10,000 signatures on the petition, local news media were examining the faulty decision and hundreds of community members had committed to attending the press conference. This pressure, which would not have happened without your partnership, was a game changer.

“We want to thank every single community member and partner organization who signed the petition, helped us mobilize in Chicago and facilitated key meetings to make this outcome today possible,” said the Sikh Coalition’s Executive Director, Sapreet Kaur. “The activisim of the Chicago sangat – local gurdwaras, local lawyers and families who helped make phone calls – was incredible and crucial in this victory today.”

The Sikh Coalition has extended thanks to the Sikh Coalition’s Board Chairman, Narinder Singh, Reverend Dr. Otis Moss III and U.S. Civil Rights Commission Chairman, Martin Castro, for speaking at the press conference today. We express our gratitude to the Illinois Sikh Community Center (Wheaton Gurdwara), who helped us facilitate a meeting with the State’s Attorney’s Office, which led to a state hate crime charge being filed. We thank Darien Police Chief Brown for attending the press conference and for his ongoing support and solidarity with the Sikh community. We would also like to thank local attorney Rishi Agrawal, who has generously offered to provide pro bono representation to Mr. Mukker in the ongoing juvenile case to protect his rights.