Los Angeles: Authorities in Los Angeles have filed hate crime charges against a man who brutally assaulted a Sikh bus driver and called him a “terrorist” and “suicide bomber” during the attack last November.

Balwinder Jit Singh had sustained serious injuries during the November 6 assault and was taken to a hospital with a disfigured face and infection in his eye that required weeks of recovery.

The Inglewood District Attorney’s Office filed a hate crime charge yesterday against KC Tard, who brutally attacked Singh and had called him “terrorist” and “suicide bomber.” Tard also accused Singh of hijacking the bus while he was viciously assaulting him.

Advocacy group Sikh Coalition said in a statement that the local police had initially failed to take into account the hateful slurs used against Singh, instead classifying the crime as a simple misdemeanour assault. In January, the Sikh Coalition’s legal team intervened and urged the Los Angeles County Sheriff’s Department to investigate the case as a hate crime. The Inglewood District Attorney’s Office filed a felony count of Battery on Transit Personnel with a Felony Hate Crime enhancement against Tard. 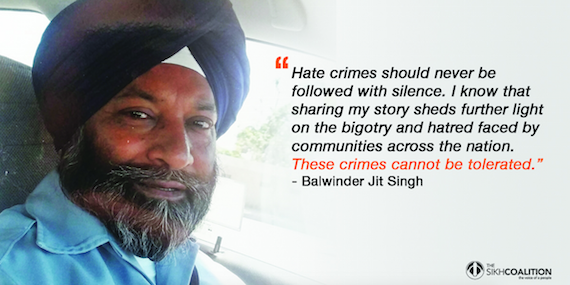 “I was attacked because of my Sikh religious appearance and I’m grateful that authorities re-examined my case and finally brought hate crime charges against the assailant,” Singh said. “Acknowledging hatred when it occurs is the necessary first step for combating the problem.” The rights group said in recent months, as hateful political rhetoric has ramped up, it has witnessed a dramatic increase in hate crimes and backlash directed towards the Sikh community.

“The Sikh turban stands for justice and equality,” said the Sikh Coalition’s Senior Staff Attorney, Gurjot Kaur. “It should be celebrated, not feared, and we will continue to educate law enforcement agencies and Americans alike on the necessary steps required to combat the problem of hate in our country.”

The Sikh Coalition was joined in support by nine other civil rights organisations, led by the LA chapter of Asian Americans Advancing Justice who had underscored the importance of charging this case as a hate crime.

“The decision by the District Attorney’s Office to include a hate crime enhancement charge in Singh’s case helps to send a strong message that targeting individuals by race or religion will not be tolerated,” said Karin Wang, Vice-President of Programs and Communications for Asian Americans Advancing Justice – LA. (Source: The Tribune).