Washington: The American Sikh Council (ASC) [formerly known as World Sikh Council – America Region] has expressed concerns over the shooting of a 39 year old Sikh American man in the East Hill section of Kent, Washington at around 9 pm, on March 3, 2017.

According to the Seattle Times report, “The victim described the shooter as a 6-foot-tall white man with a stocky build. He was wearing a mask covering the lower half of his face.” An unknown white man simply goes up to an innocent man who happened to be of the Sikh Faith, working on his vehicle in his own home and is shot in the arm. This unknown ‘white’ shooter stated, “Go back to your own country,” before shooting the victim.

This hate crime follows up on heels of the murder of an Indian man and additional shooting by another ‘white’ man in Olathe, Kansas last week on February 23, 2017.

“More and more terrible acts are being carried out, due to the environment of heightened hate rhetoric created over the past year. Some people who seem to have been emboldened by the pomposity of the current leadership within the country combined with the issue of immigration. This corrosive mix needs to be nipped in the bud before it turns into an inferno across USA”, said ASC.

“It is imperative that US President takes immediate action and vociferously speaks out against all forms of hate, bias, racism as this has no place in a country where the right to practice one’s religion is enshrined in the constitution”, ASC statement reads further. 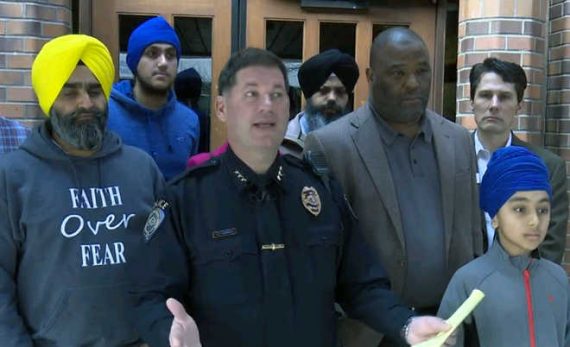 The Sikh body further added that the Sikhs in USA have been continuously at receiving end of all the racist violence perpetrated by mostly ‘whites’ with one Sikh American being either attacked, shot and/or killed nearly every month since early last year, across the country. No ethno-religious community should ever be targeted, simply for looking different or for wearing a religiously mandated ‘turban’.

The American Sikh Council (ASC) has sent its sympathies to the family and loved ones of the injured victim. We pray for a speedy and full recovery of the young man. Our prayers are with the victim, his family, and the local community. May the Almighty lighten your burden, and grace you with hope and healing under these very difficult circumstances.

“Such atrocious acts must be condemned in the strictest manner and the American Sikh Council (ASC) stands in solidarity with all civilized people. Religious and ethnic bigotry must be taken very seriously and condemned publicly by all the appropriate national faith organizations”, reads ASC statement.

Sikh body demanded that the government leadership and administration must take serious note of such hate crimes and the culprits need to be punished severely for these abhorrent crimes.

“The fallout and repercussions of violence by a small minority of radical white terrorists especially in America continues to have very serious consequences against many minorities, especially against Sikh Americans through conflation, misidentification, ignorance and hate”, ASC statement reads further.

The American Sikh Council has urgent all the Gurdwaras to be vigilant and report any suspicious activity to the law enforcement authorities immediately.