Chandigarh: A police officer in Uttar Pradesh has become the latest victim of mob lynching and attacks by cow vigilantes. This attack is a consequence of the growing impunity that perpetrators of cow-related violence have in Uttar Pradesh, Amnesty India said today.

On 3 December, police inspector Subodh Kumar Singh was shot dead after he reportedly tried to control mob violence in Bulandshahr, Uttar Pradesh after carcasses of 25 cows were found close to a police post. A post-mortem report confirmed that he died of bullet injuries. The mob also injured more than five policemen and burned down a police station. A local man was also killed during the violence. 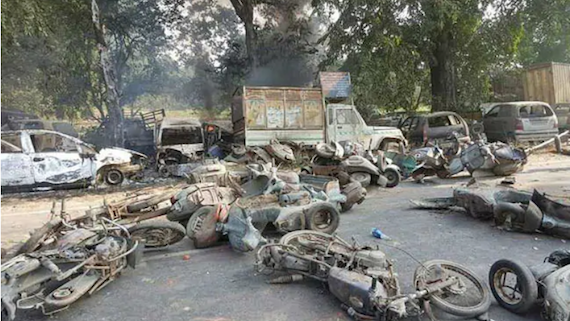 “The Uttar Pradesh government have arrested four people so far in the death of police inspector, Subodh Kumar Singh. But mere arrests are not enough. The disturbing truth is that cow vigilante groups operate in many cases with the tacit approval of state authorities. Subodh Kumar Singh was the first investigating officer into the death of Mohammed Akhlaq. On 28 September 2015, Mohammed Akhlaq was killed by a mob in Dadri in Uttar Pradesh on the suspicion that he possessed and consumed beef. Three years later, Akhlaq’s family is still waiting for justice, and now the family of Subodh Kumar Singh is mourning the death of their loved one. The sad reality in Uttar Pradesh is that neither police nor marginalised communities, or in fact any one, are safe from the violence perpetrated by cow vigilantes,” said Asmita Basu, Programmes Director, Amnesty India.

In October 2015, following the death of Mohammed Akhlaq, local BJP leader, Vichitra Tomar, told the Times of India “The police have arrested innocent people. We also demand legal action against those people, who are engaged in cow slaughter, as it is hurting Hindu sentiments”. Shrichand Sharma, vice-president of BJP’s western Uttar Pradesh unit told the newspaper Indian Express “This happens every day. When we hurt people’s sentiments, such clashes take place. This was not a communal riot. The Hindu community worships cows. Whose blood won’t boil if they see cow slaughter?”

On 1 June 2016, the then Member of Parliament and current Chief Minister of Uttar Pradesh Yogi Adityanath said that the family of Mohammad Akhlaq, should face charges for cow slaughter and be stripped of the compensation they were given after his killing.

“The Chief Minister of Uttar Pradesh, Yogi Adityanth must take responsibility for the death of the police inspector, Subodh Kumar Singh. A culture of fear, hatred and impunity has spread across Uttar Pradesh. Many more will be attacked by cow vigilante groups in the state if the government does not end the prevailing impunity and bring those responsible to justice. The increased religious divisions that this government encourages only puts ordinary people at risk of discrimination, hostility and violence. This must end immediately and the government must commit to respecting the rights of all people,” Asmita Basu said.