Southampton: A school head teacher has apologised to two Sikh girls after they were ordered to remove their turbans on the first day of term.

Newly enrolled year seven student Prasimran was told to take it off shortly after walking into school, while Simranjot, who is in year nine, said a teacher spotted her coming through the gates yesterday.

Both of the girls … refused to remove the Keski/ Dastar.

They claim the school suggested they were wearing them for ‘fashion’ and that they should be replaced by headscarves usually worn by Muslim women. 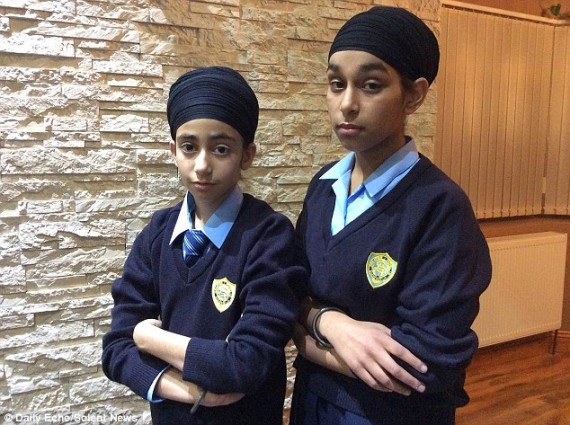 Simranjot says she was forced to take hers off after staff began unravelling it, something which Sikhs regard as highly disrespectful, and her mother arrived at noon to take her home.

Their furious families have blasted the school for what they say are ‘discriminatory’ rules.

Simranjot’s mother Sukhwinder Kaur, 38, said: ‘They are in the correct uniform the only thing different is the turban?’

Prasimran’s Jaskiran, 18, a former pupil there said: ‘It’s discriminatory. They are a Catholic school and are supposed to support equality.

There was a total lack of understanding. We need to change the school’s policy.’

However, the school has said it was a ‘misunderstanding’ and apologised to both families.

In a statement, head teacher Lyn Bourne said: ‘I would like to apologise to students and parents for any offence caused by our enforcement of our uniform policy this morning.

‘The situation that occurred was a misunderstanding and I can confirm that both girls involved now have permission to wear a turban to school.

‘These should be plain navy blue or black until we are able to identify an appropriate supplier.

‘St Anne’s is an inclusive school community that respects all faiths. We are united by our shared values and do not allow ourselves to be divided by our differences.’

Southampton City Council cabinet member for communities Satvir Kaur, a former headgirl there and a practicing Sikh said: ‘It hasn’t been a great first day back but I’m pleased the situation has been resolved.

‘Southampton has a variety of diverse communities all of which recognise the need to be valued and respected.’