NewDelhi: The hearing on the bail plea filed by convict in 1984 Sikh genocide case retired naval officer Captain Bhagmal will continue, he was held guilty in a case relating to the murder of a family of five in Raj Nagar area of Delhi Cantonment on November 1, 1984 after the execution of Indian Prime Minister Indira Gandhi. 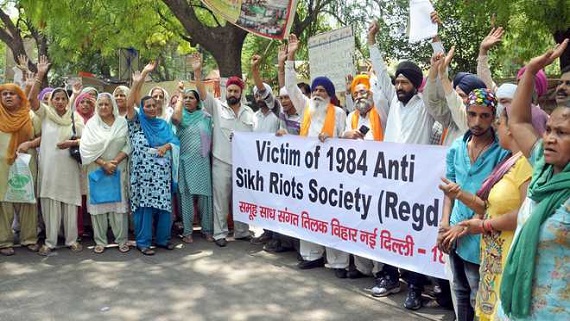 Khokhar, Captain Bhagmal, Girdhari Lal and two others were held guilty in a case relating to the murder of five members of a family. File photo

Earlier in the month of May a convict in 1984 Sikh genocide case  was granted bail by the Delhi High court for a week so that the convict who is serving a life sentence  can take care of his wife who was to undergo an operation in the month of June.

A bench of Acting Chief Justice Gita Mittal and Justice Anu Malhotra released former Congress councillor Balwan Khokhar on bail as his wife is slated to undergo an operation at the AIIMS, media sources said.

Balwan Khokhar, Captain Bhagmal, Girdhari Lal and two others were found guilty of murdering five members of a Sikh family.

To the appeals filed by the convicts in the High Court the CBI as a counter move  too filed an appeal stating that the convicts were engaged in “a planned communal genocide” and “religious cleansing”. The agency has also appealed against acquittal of Sajjan Kumar.