Chandigarh: Where as the Indian government reportedly attempted to cornor neighboring Pakistan on the issue of ‘terrorism’ during Heart of Aisa conference in Amritsar today, the activists of Shiromani Akali Dal Amritsar (Mann) held a demonstration to protest against ‘state terrorism’ in the Indian subcontinent. 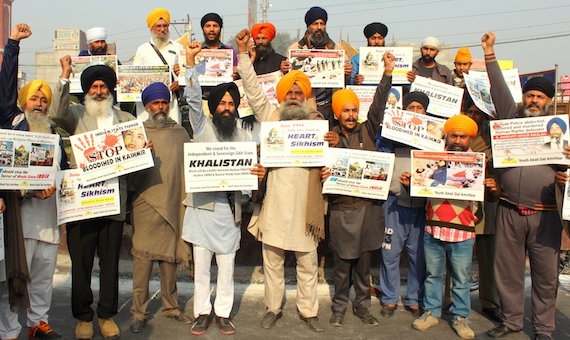 A view of protest by SAD (A) leaders at Amritsar | Photo: Narinderpal Singh

SAD (A) activists belonging to Amritsar and Gurdaspur districts gathered at Chattiwind road, where they held a demonstration. They were holding placards displaying slogans like “STOP BLOODSHED IN KASHMIR”, “June 1984 Indian Army Attack on HEART of SIKHISM”, “We Stand For the Independent & Sovereign Sikh State Khalistan” and “UN Should Stop the Terror of Hindu State INDIA”.

SAD (A) leader raised issues of human rights abuses in various parts of the Indian sub-continent and alleged that people of Punjab, Kashmir, Mizoram, Nagaland, Assam and Gujarat were subjected to state terrorism.

WITH INPUTS FROM NARINDERPAL SINGH (AMRITSAR).