Jaipur: Following its set agenda  persistently to mold the education system of India as per the facets required for the project of building India a uniform unit (Hindu Rastra). The Rajasthan education board under the influence of pro-hindutva BJP has here in its offical text book for class 12th has claimed that Maharana Pratap didn’t flee the 1576 Battle of Haldighati against Mughal emperor Akbar but “turned the battle towards the hills.”

The book purportedly maintains that Maharana Pratap’s horse Chetak placed his forelegs on the head of Mardana, the elephant of Mughal general Man Singh, during the battle. Maharana Pratap then apparently threw his lance at Man Singh that hit his mahout but in the process a sword held by Mardana’s trunk cut one of Chetak’s forelegs. The tale further states that Seeing Pratap in trouble, the book says, Jhala Bida took the royal umbrella from Pratap who then “turned the battle towards the hills”. 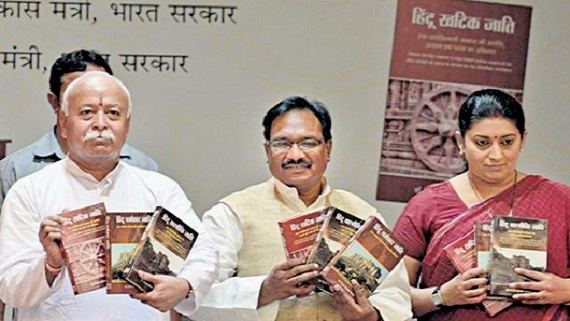 Furthermore, the narration claims that Maharana Partap made a “change in the battle situation” when fighting was at its peak but makes no mention of his fleeing the battlefield, a supposed fact given by most historians. The experts are of the believe that all these fictional facts are conceived just to have an impression of Hindu supremacy over Muslim adversaries and the need to militarist the predominantly coward and timid psyche of Hindus by producing their own paper heroes , media reports said.

It all began in March this year when Rajasthan education minister Vasudev Devnani in the state’s BJP government made a claim that Maharana Pratap won the battle of Haldighati -his claim wasn’t able to survive the tough historical facts.

Apparently, to prove the above said claim and  state’s education board being a tool in hand the pro-hindutva forces started a narrative by revising the Class 10 social science textbook in which it gave a justification to the fictional claim of the minister which inquired that “There could be no doubt that Maharana Pratap won the battle of Haldighati. If Akbar had won the battle, then why would he attack Mewar six times after that?”

“In fact all heroes — from Pratap to Prithviraj Chauhan — that the RSS is projecting had lost conclusively. By twisting facts one cannot re-write history,” reads the statement of professor D N Jha, former member of Indian Council for Historical Research published in an English vernacular.

But in reality after the Battle of Haldighati, the Mughals conquered Gogunda, the place where the king’s coronation took place. Gogunda and Chittor, another place of great significance to the Mewar kingdom won by the Mughals earlier, remained under Mughal control till Maharana Pratap’s death. The Mughals, however, could never capture him, reports Hindustan Times (HT).