Sacramento, CA: (OFMI) The California Department of Education’s Instructional Quality Commission’s History-Social Science Subject Matter Committee convened on March 24, 2016 in Sacramento for a public hearing on the state’s K-12 History and Social Science curriculum framework. The process determines the guidelines for California’s textbooks and instructional materials and through a multiyear series of hearings welcomes and assesses content submissions from the public. During the submission process, minority groups representing Dalit and other low-caste communities were alarmed to see revisions they claimed would lessen the historical significance of caste-based oppression and subsume minority religious identity under Hinduism. Dalit (meaning “oppressed”) is the name for members of the lowest-caste in the Hindu Varna system, often called the “untouchables.”

As the curriculum touches South Asian history in several grade levels, submissions ranged from geographical designations of South Asian landmarks to the accuracy of the information presented about the region’s religious heritage. Religious Hindu organizations like Hindu American Foundation (HAF), Vedic Foundation, and Uberoi Foundation submitted revisions to separate and disassociate the history and impact of the caste system from the religious teachings of Hinduism, as well as challenge the framework’s emphasis on the inequity between men and women in Hindu culture. “Denial of such a painful history is more disrespectful and only adds to the discrimination,” said Srikanth Jandhyala of the Association for India’s Development. “As a Hindu by birth I care to know the true history.”

The committee chaired by Bill Honig rejected a multitude of submissions from the Hindu groups including all eight of the submission from the Hindu America Foundation (HAF). The HAF has been involved in the curriculum battle in several U.S. states and is ideologically aligned with the right-wing Hindu-nationalist organization the Rashtriya Swayamsevak Sangh (RSS). Suhag Shukla, executive director for the HAF, also financially supported the congressional campaign of the 1984 Sikh Genocide denier Rep. Ami Bera (D-Elk Grove, CA). Past submissions from HAF included striking “Sikh” from the descriptions of America’s first Asian American Congressman Dalip Singh Saund. According to attendees, HAF’s submissions on Sikhism were the catalyst to involve several California Sikh organizations to take a more active role in the curriculum discussion. 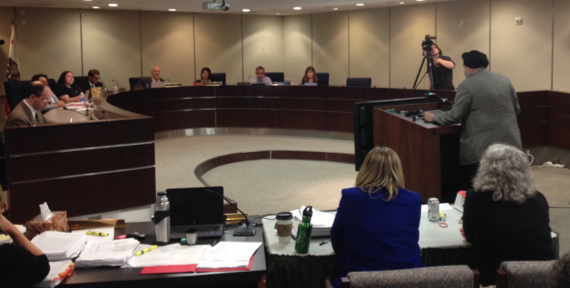 “It is important to recognize the elements of creeping Hindu fundamentalist revisionism,” said Bhajan Singh, Director of the Stockton-based Sikh Information Centre. “We’ve experienced how these beliefs inspire people to view others as untouchable, deviant, and deserving of whatever suffering assigned to their birth caste, including death.” Singh was pleased with committee’s decision to reject the additions from HAF, but credited the success to the South Asian Faculty Group and the several Dalit-rights groups who attended the Sacramento hearing.

“The South Asian Faculty are not an advocacy group, but they are a committee of experts from California’s universities,” said Umar Malick with the Indian American Muslim Council. “Their work is now being targeted by Hindu fundamentalists who have a long track record of meddling with the history books to advance their views and spread hatred among minority communities.” Followers of Islam make up over one-sixth of India’s population, yet Malick sees the textbook battle as an attempt to malign the religion’s history in South Asia. “They are bent on propagating a negative portrayal of the Muslim rule in the subcontinent and have even tried to blame the caste structure inherent to Hinduism on Muslims,” added Malick.

He joins a growing coalition of South Asian minorities who were galvanized by the adamant attempts of the HAF to bring ideological battles about caste and Hinduism to America. Representatives from the Alliance of South Asians Taking Action, Association for India’s Development, Ambedkar Association of California, Friends for Education in India, Indian American Muslim Council, Organization for Minorities of India, Sikh Coalition and Sikh Information Centre testified before the subject matter committee.

Among the controversies in the curriculum was the use of the term India to identify ancient and historic regions that pre-date the modern Indian state. While Hindu groups lobbied for the absolute usage of the term India, the committee instead qualified definitions of India by recognizing the historic diversity of South Asian with the inclusion of other nations like Pakistan and Bangladesh. Despite this compromise, Hindu groups continued to claim that the curriculum would unfairly affect their Indian identity. Dalit groups lobbied for an understanding of Indian history that reflected the diversity of South Asian. “Much of the history of South Asian identity has been written by upper-caste [Hindu] academics,” said Thenmozhi Soundararajan of the Ambedkar Association of California. “They have written much about class, but omitted the vital organizing of Dalit Bahujans and the religious minority communities of Christians, Buddhists, and Muslims.”

The hearing also revealed the complicated relationship between sentiments and academic accuracy in California’s textbooks. Hindu groups claimed that the proposed depictions of the Hindu caste-system would encourage a negative view of Hinduism. While evaluating a submission about Hinduism’s relationship to religious diversity, committee chairman Bill Honig commented, “I don’t know if it is true, but it is a good sentiment.” It followed the trend of testimony from other Hindu organizations that claimed that the academic perspective could lead to “diminishing the dignity” of Hinduism. A revision was also submitted by Hindu groups to identify a river in Punjab as the Saraswati River, a sacred river which appears in ancient Hindu religious texts. “Punjab means land of five rivers, but Hindu activists want the mythological Saraswati to be the sixth,” said Bhajan Singh, who sees the addition as an attempt to anachronistically impose the Hindu religion into the curriculum.

“Our primary concerns are human dignity and academic integrity,” said Steve Macias, outreach coordinator for Organization for Minorities of India, “It would be a grave injustice to ignore the plight of the minorities and to downplay the violent segregationist history of Hindu caste. We are thankful that the committee has sided with evidence-based scholarship over religious and political agendas.”