‘Hindutva Chauvinism’ Responsible for the Underlying Conflict and the Current Crisis in South Asia: WSP

London/Chandigarh: In a written statement issued yesterday (copy available with Sikh Siyasat News), the World Sikh Parliament (WSP) said: “India’s incessant journey to an ever more right-wing Hindutva position, in terms of its treatment of other nations, minorities and even neighbouring states, has led to the dangerous but almost inevitable crisis witnessed in the sub-continent over recent days. The spectre of full-scale war with Pakistan over the disputed territory of Kashmir has, quite rightly, led to global alarm and the welcome, if somewhat belated, intervention from the UN and major world powers”.

“Even casual observers of the crisis will know that the current crisis is being driven entirely by the vote bank politics of the forthcoming Indian general elections. Both Indian PM Modi’s BJP and the main opposition Congress parties are desperately vying to play the ultra-nationalist card in order to gain the Hindutva vote. This is being done at the expense of the people of Kashmir and, in case of war, the people of Punjab where experts have long believed that any military conflict will be largely fought. The Sikh homeland in Indian-controlled Punjab, which itself is going through its own struggle for self-determination, is therefore at the heart of the issue and the World Sikh Parliament will hold India strictly to account for any loss of life or destruction in our homeland”, the statement reads.

In this statement the World Sikh Parliament had urged the UN to take the lead in seizing this moment to nurture peaceful conflict resolution in both Kashmir and Punjab, based on international law which recognises the right of self-determination as a fundamental human right. “The forcible denial of that right has led directly to hundreds of thousands of deaths in both regions over recent decades; it is time the international community woke up to the need to address the unlawful and morally indefensible position of the Indian state. Let us be clear; there will be no peace in the region until that happens”, it added. 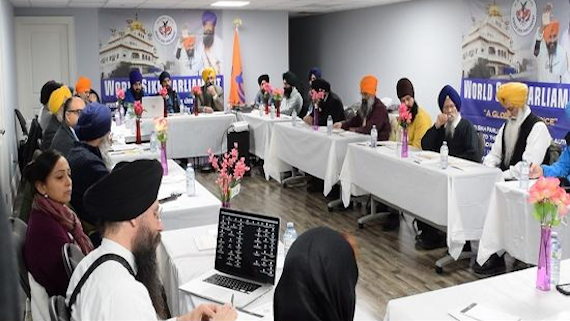 WSP stated further in this statement that “Article 1 of the 1966 Covenant on Civil and Political Rights, accepted as the bedrock of international humanitarian law, provides that all peoples have the right to self-determination. Incredibly, when India signed up to the 1966 Covenant, it officially informed the UN that it does not accept that Article 1 of the document applies to any peoples or nations held within its territory! The UN itself has asked India to withdraw that ‘reservation’, but India refuses to do so. Instead it has used vast resources over decades to brutally supress legitimate self-determination movements, resulting in untold misery and destruction. At the same time it has steadfastly refused to comply with UN Security Council resolutions requiring the holding of a plebiscite in Kashmir, just as it is now criminalising those campaigning for an independence referendum in Punjab in 2020. It is clear that the international community must now focus on tackling that blatant defiance of its own legal standards if there is to be any prospect of peace in South Asia. We also urge saner voices within India to take up this challenge, before it is too late”.

“On an immediate basis however, we demand that the Indians stop using the Sikh homeland and Sikh troops in its military aggression against Pakistan. The Sikh nation is not a party to the Indo-Pak conflict and our homeland and resources must not be utilised for that purpose. The use of nuclear weapons there risks the annihilation of most of the world’s Sikhs; no Sikh can support the war mongering antics of the Indian establishment and its hysterical media acolytes. We laud the peaceful posture and wise counsel of Pakistan PM Imran Khan who has repeatedly offered negotiations and talks to his counterpart over recent days. We call on Sikh soldiers serving in Indian forces, in case of war, to refuse to engage in offensive actions and instead to go to Punjab to protect its people in the face of an existential threat to the Sikh nation and other Punjabis”, the statement reads further.

The organisation has also extended its ‘full support’ to those in Kashmir who are struggling to secure self-determination in accordance with international law. “The shelter and assistance given to Kashmiris by Sikhs over recent days as they were targeted by Hindutva mobs across India last week demonstrates that the Sikhs will always stand up for what is right. We have not forgotten – or forgiven – the way those very same Hindutva forces carried out genocide on the Sikhs in 1984, where the inhuman targeting of a minority was also driven by electoral politics”, it added.

“The events of recent days must not be allowed to prejudice the excellent Pakistani initiative to open the Kartarpur Sahib corridor. This year we will mark the 550th birth anniversary of Sri Guru Nanak Dev Ji and that project is a timely reminder of the need to follow the Guru’s message of peace and just co-existence. Modi, Rahul Gandhi and others in India’s rabble-rousing establishment should humbly accept that message at this critical time. The current Hindutva juggernaut in India, inspired by a fascist Bhramanistic ideology that seeks to crush the masses which was so robustly rejected by the Guru, must not be allowed to trigger a global catastrophe”, the statement reads.