New Delhi: As the ruling forces at the Centre move forward with their agenda to saffronize the history text books, Ministry of Human Resources Development (HRD) faces flak. The HRD ministry came under attack after report of an NCERT meeting which decided to fix flaws in history textbooks. Some critics have termed it as an effort to saffronize history.

According to a report in The Times of India, there was a five-day NCERT workshop held earlier in June for a review of history textbooks. 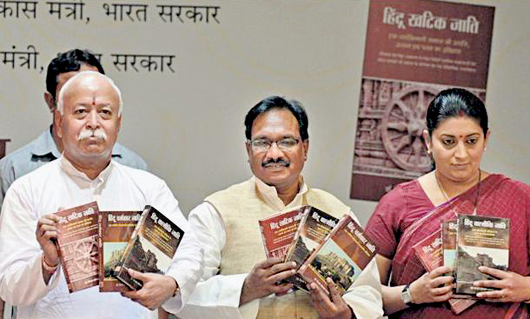 Three members of the Indian Council of Historical Research attended the workshop, one of whom said that the books had obvious problems and needed to be replaced.

Since 1977, when Jana Sangh joined government as part of the Janata regime, there has been threat of changing NCERT textbooks, especially of history. In 1999 when NDA came to power, all NCERT textbooks were changed. In 2004, UPA replaced them again.

One senior NCERT official involved with history textbooks to reported to have told certain media-persons, “Five day workshop is not held to correct minor changes. These books have been in use for more than 10 years and from time to time changes have been made and names of figures like Avantibai Lodhi were added.”