NewDelhi: The controversial Bhartiya Janata Party (BJP) MP Sachchidanand Hari Sakshi from Unnao, Uttar Pardesh who is known for his inflammatory and derogatory speeches, has kicked up another storm as he reportedly said that a law should be enacted to stop the construction of graveyard and that Muslims should be cremated since there is not enough land for graveyards.

“Whether it is named Kabristaan (graveyard) or Shamshaan (crematoriums), nobody needs to be buried. There are 2-2.5 crore Hindu saints in this country who should have a memorial after their death. That will require land. There are 20 crore Muslims, all of them need a grave. Where is the land in Hindustan?” the media quoted him saying while addressing a public rally in Unnao on Monday. 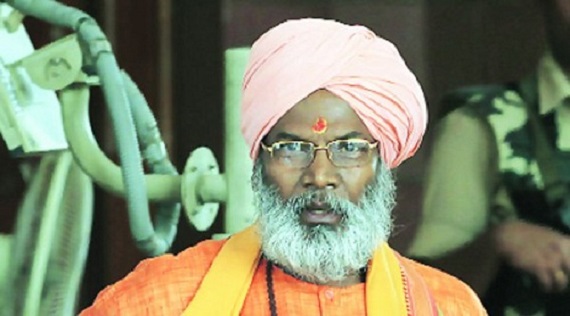 While strongly reacting to his statement the state Congress party here today said that Hari Sakshi’s controversial ‘Kabristaan’ remark is part of a communal atmosphere being created by the saffron party amid the ongoing assembly elections in politically crucial Uttar Pradesh.

“Every religion follows its own ritual. If there will be need of ‘kabristaan’ then it will be constructed. Similarly, if there would be need of ‘shamshaan’ then it would be made. This cannot be affected by provocative statements of any leader or saint,” Congress leader Sandeep Dikshit further add’s to his statement.

It is pertinent to note that earlier this month the Prime Minister of India Narinder Modi while addressing elections rally in Fatehpur raised the issue of Kabristaan and Shamshaan, saying that there should not be any discrimination in the allotment of land for both.

“If you create Kabristaan in a village, then a ‘Shamshaan’ should also be created. If there is uninterrupted electricity in Ramzan, it should also be given during Diwali. There should be no discrimination,” he added.