London: Guru Nanak Ji’s Gurpurb (Birthday) was marked with a historic celebration at the Houses of Parliament. The Sikh Federation (UK), the Sikh Network and the All Party Parliamentary Group (APPG). for British Sikhs organised a befitting evening of celebration, inspiration and recognition. The event was full and attracted many politicians, professionals, business people and media outlets.

Rob Marris, Chair of the APPG for British Sikhs opened followed by Tom Watson, the Deputy Leader of the Labour Party and Alison Thewliss, SNP MP for Glasgow Central. Tom Watson MP provided a warm welcome and recognised the contribution of Sikhs to Britain, he also reiterated his commitment to addressing the lack of Sikh representation in Parliament. Councillor Preet Kaur Gill from Sandwell delivered a moving key note speech on the life of Guru Nanak Dev Ji and his message of equality she also linked the inspiring story of Princess Sophia Suffragette a pioneering Sikh female activist. 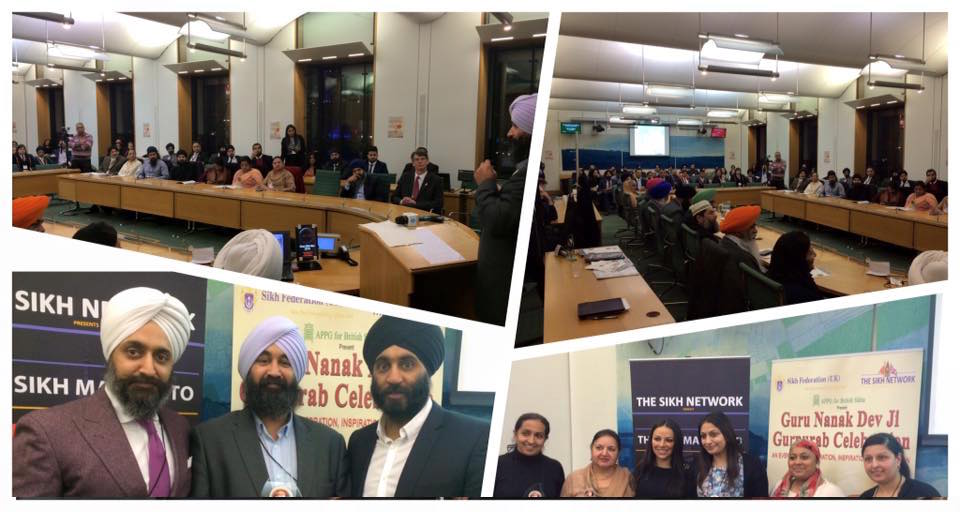 Children from the Khalsa Secondary Academy shared their unique personal perspectives on the life of Guru Nanak Dev Ji, as did senior representatives from interfaith groups including David Walker, the Bishop of Manchester, Chair of the Advisory Council on the Relations of Bishops and Religious Communities and Ibrahim Mogra the Assistant Secretary General of the Muslim Council of Britain.

The master of ceremonies was Dabinderjit Singh OBE adviser to the Sikh Federation (UK), although Manjit Kaur Kang the project manager for the event was the key to the success. Other speakers included Jas Singh from the Sikh Network, Parmjit Singh Dhanda the first and only Sikh Government Minister, Pete Singh Virdee (businessmen and philanthropist) and Makhan Singh Padda owner of award-winning Vicarage Nurseries.

The event ended fittingly with a recognition award ceremony, with special contribution awards for Balwinder Kaur Saund, Chair of Sikh Women’s Alliance, Jameen Kaur of Amnesty International for work on Human Rights, Jasveer Singh of Sikh Press Association & Manpreet Singh (Badhni Kalan) the UK reporter of Ajit Newspaper for Media services, Charanjit Singh (popularly known as Chaz Singh) for his Political contribution and Sukhbir Kaur (popularly known as Sukhi Kaur). for tireless Seva behind the scenes. A lifetime achievement award was given to S. Gurmukh Singh. All award winners were. Visibly moved at being recognised at the first Guru Nanak Dev Ji’s Gurpurb event in the UK Parliament.

Jas Singh from the Sikh Network said: “it great to be marking Guru Nanak Dev Ji’s Gurpurb in Parliament, as he was not only the founder of the Sikh Faith, but also the first Sikh Activist. As Sikhs around the world celebrate in Gurdwaras, this year we are delighted to be also celebrating it in the UK Parliament, keeping to the Sikh tradition of Miri Piri.

A huge amount of effort and work has gone in by the Sikh Network team for this event, but also around the Sikh Manifesto, events like this and previous Women & Politics & PwC Sikhs in Politics events in the last six months really open up and appeal to a wider audience, a key objective of the Network. We have received overwhelmingly positive feedback and hope we can attract even more activists to work with us”

The Sikh Federation (UK) and the Sikh Network warmly thank all those who attended and supported this event, especially our sponsors Vicarage Nurseries and the Sikh Channel. Everyone collectively shared Guru Ji’s universal message of One God, Truth, Equality and Activism.