Following the assurance of withdrawal of draconian farm bills, the protesting farmers are celebrating. Indian PM Modi committed the act of blasphemy during his address. He said, “Guru Gobind Singh prayed to some Devi…” Most of the Sikhs did not pay attention to this. Except for this misconstruing, this address or repealing of draconian farm laws leaves the same fate for Punjab – an unsustainable, unprofitable, suicidal debt trap agricultural model for farmers. The rigorously sincere efforts to bring Punjab out of this trap are ongoing. But, Will anything change after nixing these laws?

The question remains unanswered and is haunting. There is no definite answer on how to shape the future of agriculture. The only solution in discussion in Punjab is crop diversification which is a small part of this complex problem. The identification of a problem is more indispensable before suggesting solutions. Do you remember the famous green revolution? Yes, the one famously talked about increasing the grain yield in the late 1960s in the region. The micronutrient deficiency in the mid-1970s halted the increasing grain yields compensated by the application of micronutrients into the soils of Punjab. The addition of inorganic nitrogen fertilizer and irrigation via groundwater extraction boosts the crop yield to five folds enough for feeding the Indian population. 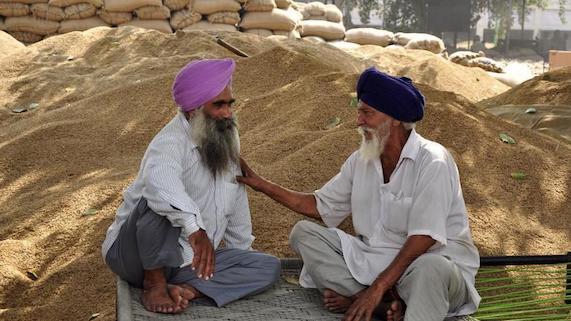 Firstly, we must understand the difference in thought processes between Indian mainstream policymakers and mainstream pro-Punjabi personalities. Indian mainstream thought mainly focuses on feeding Indians with the help of agricultural professionals, political and economic national policies – biased against hardworking residents of Punjab. Pro-Punjabi people envision the conservation of natural resources (air, water, and land), along with the economic development of peasants, farmers, and labor. The only way to know the root cause of this whole agricultural situation of Punjab starts with understanding these core differences. The monoculture of paddy (rice) and wheat – now targeting Punjabi farmers – was encouraged by the Indian policies in Punjab. The Shiromani Akali Dal (a political outfit representing the Sikhs at that time) adopted the Anandpur Sahib resolution (October 17-18, 1973) calls for the rapid diversification of farming (Resolution No. 3). The imposed cropping rotation and proposed diversification demonstrate the difference between the vision of Indian policymakers and the Punjabi people. This simple contrast takes us where we stand in discussing the common notion of crop diversification to date. 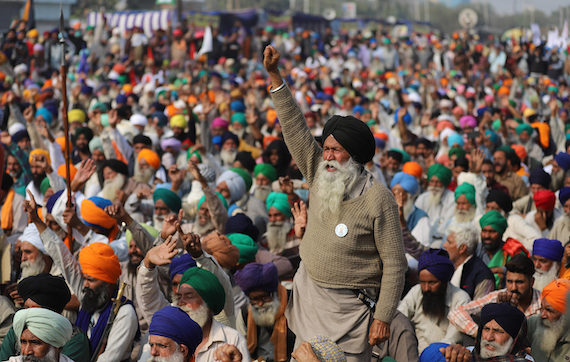 Secondly, the monocultural cropping rotation requires intensive water. And the surface water of riparian Punjab is diverted to non-riparian states of India, against the international riparian laws. To this injustice, the Anandpur Sahib resolution states, “The arbitrary and unjust Award given by Mrs. Indira Gandhi during the Emergency on the distributions of Ravi-Beas waters should be revised on the universally accepted norms and principles, and justice be done to Punjab” (Resolution No. 2(d)). With the diversion of surface water to non-riparian Indian states, Punjab has no choice besides pumping the groundwater to meet the crop yield demands of imposed monocultural cropping rotation. So we now know that the Sikhs and Punjabi people understood the fallouts and demanded justice well in time. On the other hand, India is either not able to understand or deliver. The demands of the Sikhs and Punjab remain the same during Dharam Yudh Morcha and now leading to farmers’ agitation, 2020.

The farmers’ protest or agitation entered the outskirts of the Indian capital, New Delhi on November 26, 2020. The base of this protest lies in the principles of Anandpur Sahib resolution No. 3 stating:

(b) An economic and social structure that provides for the uplift of the poor and depressed
sections of society.

(c) Unabated opposition to the concentration of economic and political power in the hands of the
capitalists.”

The interconnection of the history, present, and future requires understanding. A brief overview of the interconnection of the last five decades will shape the future. Let’s come back to the proposed solutions to our problem. Along with crop diversification, the current time requires breeding of resource use efficient crops – water and nitrogen – with present-day genetic advancements. An increase in irrigation led to a dwindling water table and excessive nitrogen fertilization exacerbating nitrate pollution into the water bodies of Punjab. According to the United States Environmental Protection Agency, the nitrate concentration exceeding 10 mg/L is harmful to human health. But, the nitrate content of river Sutlej in the Nangal area of Punjab is in the range of 95-120 mg/L at the effluent drain of National Fertilizers Limited. So, the waters of the Sutlej River entering Punjab are toxic.

Similarly, the nitrate concentration in groundwater is less researched, and the estimates suggest nitrate leaching of 50kg N/ha each year. The nitrate interaction with atrazine (found in herbicides) is carcinogenic. The residence time of atrazine in the soil is weeks to months, and it readily moves towards the groundwater. And everything attaches back to Indian decisions taken since five decades to destroy Punjab.

The intentional resource damage caused to Punjab by the Indian policies is irreversible. But, Punjab can sustain with the blessings of Guru Nanak Sahib Ji. Punjab should stay within its limits in water and nitrogen application. The potential shift to less water and nitrogen demanding crops while diversifying human nutrient supplies and eliminating overexploitation of resources. The political decisions need to reduce food wastage combined with precision agriculture, technological improvements, and communication with stakeholders.
The history shows the unique differences between the thought processes of political nationalism (anti-natural resources vision) and children of soil – Punjabi – which is pro-natural resources vision, respectively. The Punjabi bright minds found the problem and relevant solution of the time, back in 1973. Anandpur Sahib resolutions are relevant after five decades. The lowering water table and poisonous water bodies attribute to Indian policies against the will of the Punjabi people. We are late in implementing the remedial measures. Punjab needs more open dialogues to find an alternative agricultural model. The potential impacts of increasing nighttime temperatures, depleting groundwater, water pollution, surface water diversions, evaporative cooling, and economics for virtual water needs discussions.