Chandigarh: A delegation, led by Manwinder Singh Giaspura, who had discovered in 2011 a mass grave of Sikhs massacred during November 1984 Sikh genocide at village Hondh Chillar in Haryana, met leader of opposition in Punjab Assembly here on Friday. He urged the LoP to take up the matter Hondh Chillar and Gurgaon-Pataudi massacres with the Haryana government. 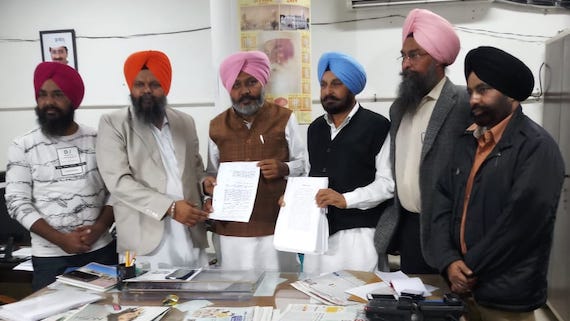 The delegation also delivered copies of the inquiry reports conducted by Justice T P Garg (Retd) in support of their demand.

A release issued by the Aam Aadmi Party (AAP) states that LoP Harpal Singh Cheema assured the delegation that he would take up the matter with state chief minister, Manohar Lal Khattar and Assembly speaker, Gian Chand Gupta to bring those behind the carnage to justice, saying that he would insist them to discuss the issue on the floor of the House.

Manwinder Singh Giaspura informed that 32 innocent Sikh from Haund- Chillar and 47 from Gurgaon-Pataudi village were ruthlessly done to death by a mindless mob, saying that a committee was constituted to look into the brutal killings under Justice T P Garg (Retd).

They lamented that even after 6 years of inquiry down the line, four police personnel were found guilty of dereliction of duty, recommending stringent action against them. The committee had also directed to pay the affected families a compensation of Rs 10.6 crore (Haund Chillar) and Rs 13 crore (Gurgaon-Pataudi). Cheema informed that while the Haryana government had paid the compensation to the affected families, action against the killers was still awaited.