Amritsar: As war clouds are hovering over India and Pakistan following air strikes on each other’s territory, the Dal Khalsa has called upon the United Nations to intervene to end hostilities between both the nuclear countries as the entire region is under threat.

The pro-freedom Sikh organisation has also urged the world organisation to convene special session of the General Assembly on Kashmir issue for permanent resolution to the dispute without which regional stability is not possible.

Concerning about the worsening geo-political situation in South Asia in view of the Indo-Pakistan drumming of war., the Dal Khalsa has approached the UN and Security council members, said party spokesperson Kanwar Pal Singh. 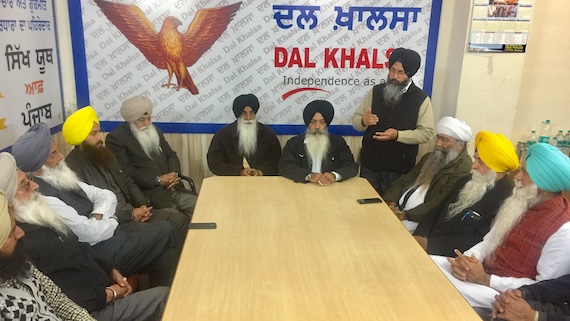 A view of meeting of the Dal Khalsa

In a letter to the United Nations Secretary General Mr. António Guterres, Dal Khalsa president H S Cheema said, “We are concerned about Punjab being converted into a theatre of war by the two countries. The Sikh people and Punjabis want the rhetoric to stop and also a political resolution to the Kashmir and other conflicts in India including Punjab.”

Calling for immediate intervention of the UN, the Dal Khalsa communiqué made it clear that merely asking for restraint will not help till there is a serious attempt at conflict resolution. The copy of the letter addressed to UN was also sent to high commissions of five permanent members of UN Security Council- United States, China, Russia, France and UK for intervention and meditation at the earliest.

The letter further reads that both sides have already opted for limited adventure by way of air strikes. This is the first step towards war. Irresponsible statements by Indian leaders on whose minds impending Parliament elections are high and ultranationalist coverage by media is vitiating the atmosphere. This does not bode well for peace in the region, said Cheema.

Dal Khalsa leader said UN Peace Keeping Forces need to be stationed on the international borders of Kashmir and Punjab to diffuse the surcharged atmosphere and heightened tension between both the hostile countries.