Haryana (August 05, 2014): It is learnt that the leader of Shiromani Akali Dal (Badal), Shiromani Gurdwara Prabhandhak Committee (SGPC) held a secret meeting with leader of Haryana Sikh Gurdwara Management Committee (HSGMC) on August 04 at Yamunanagar. The meating was aimed to find a solution of deadlock between the two groups over the management of historic Sikh Gurdwara Sahibs in Haryana.

At the the meeting, that lasted for about an hour, it was decided that a five-member committee of Sikh intellectuals would be formed. The panel would help in finding a way out of the current imbroglio arising due to HSGMC formation and subsequent deployment of SGPC task force and Badal Dal activists in Sikh Gurdwaras in Haryana that were under the control fo SGPC. 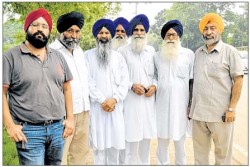 Interestingly, the meeting was reportedly arranged by former president of Delhi Sikh Gurdwara Management Committee Paramjit Singh Sarna who is often termed as a sootage of Congress party by Badal Dal leaders, who particiated in the meeting.

HSGMC leaders insisted that a headway could only be achieved after SGPC asks its taskforce to vacate Haryana gurdwaras.

The Tribune has quoted unnamed sources saying: … both sides felt that the situation was alarming and there was need to defuse tension immediately. [Badal Dal] leader Cheema said both sides have agreed to form a committee of Sikh intellectuals.

While talking to Sikh Siyasat News (SSN) over phone, the HSGMC leaders said that it must be clearly understood that there was no going back on the issue of separate gurdwara committee for Haryana.

Meanwhile, the HSGMC has has called a gathering of Sikhs at Kurukshetra on August 6.

Read this news in Punjabi/ Gurmukhi: