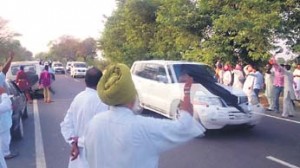 Supporters of HSGMC kept total secrecy over their plan and intelligence agencies or the media had no clues about their plans. As the Caravan of Parkash Singh Badal reached village Mithiri the HSGMC supporters led by member Jagvir Singh Bhaati showed black flags to Badal.