HSGMC takes over control of two more Gurdwaras in Kurukshetra 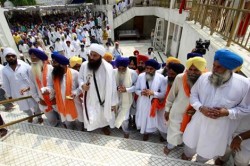 The HSGMC members and supporters took over control of these Gurdwara Sahibs on August 06 while the whole focus of administration and Badal Dal-SGPC was on Gurdwara Novin Patshahi in Kurukshetra where the supporters of HSGMC were staging a roadside dharna for last few days.

Soon after the reports of HSGMC gaining control over the Gurdwaras reached Kurukshetra a clash erupted between supporters- taskforce men of SGPC and supporters of Haryana Sikh Gurdwara Management Committee outside Gurdwara Novin Patshahi.

The Haryana police resorted to heavy lathi-charge on the members/ supporters of HSGMC to regain “control” over the situation.

The HSGMC has been moving ahead with their plan to gain control of Haryana Gurdwara Sahibs despite a restrain order by Akal Takht Jathedar Giani Gurbachan Singh. Giani Gurbachan Singh is believed to have been working under influence of SGPC and Shiromani Akali Dal (Badal).