Except HSGMC’s senior vice-president Didar Singh Nalwi, all other office-bearers and members of the committee attended the meeting. 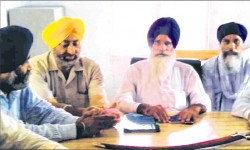 Though physical takeover remains contentious due to the reported gathering of armed SGPC task-force men, the HSGMC has decided to issue instructions to institutions managing the Gurdwaras’ bank accounts to dishonour any financial instructions from the SGPC, which has been opposing formation of the HSGMC.

Also, banks would be asked by the HGSMC not to entertain any cheques issued by the SGPC, according to a decision taken at the first meeting of the HSGMC (ad hoc) executive committee at Gurdwara Neem Sahib in Haryana.

According to Hindustan Times (HT) [t]he HSGMC’s president, Jagdish Singh Jhinda, reiterated that the committee was formulated by the state government and it was the “genuine entity” to manage Gurdwaras as well as their finances.

“We are informing bank authorities that now the HSGMC has come into existence, so only it has the right to operate the shrines’ accounts,” he said, adding that the committee also passed a resolution to seek financial statements from gurdwaras.

“Gurdwara managers have to submit account books and all other records to the HSGMC headquarters at Gurdwara Neem Sahib, Kaithal, by August 2 evening. Punitive action will be initiated against those who violate the instructions,” he said.

The executive body also condemned the siege of Gurdwaras in Haryana allegedly by supporters of Punjab’s ruling Shiromani Akali Dal (Badal), which controls the SGPC, and the security task force of the SGPC.

HSGPC executive urged Akal Takhat Jathedar, the SGPC and the Badal Dal leadership to maintain sanctity of the Gurdwaras and vacate the premises in a peaceful manner.

“Sikhs of Haryana will not tolerate such forcible occupation of the Gurdwaras, and are ready to evict the illegal occupants,” he said, reiterating the HSGMC’s “full faith” in the Akal Takht.

Jhinda also said the state administration should intervene in evicting the illegal occupants.

The committee restated its demand for 40% share in SGPC properties in Chandigarh to ensure smooth functioning of the newly formed HSGMC.

It also demanded the road from Dhamtan Sahib in Jind to New Delhi be named after Guru Tegh Bahadur, and the raising of a “befitting” memorial.

Jagdish Singh Jhinda formally announced that henceforth Kaithal would be the headquarters of the HSGMC and all meetings of the committee would be held there.