Chandigarh: Former judge of Punjab and Haryana High Court and a veteran human rights defender Justice (Retd.) Ajit Singh Bains passed away yesterday (February 11, 2022). He was 99 years of age and was living in Chandigarh.

Born in Bara Pind near Goraya in Jaladhar in 1922, he did his initial schooling from a local school and subsequently his law degree and MA (Economics) from Lucknow. He briefly worked with Punjab education department as a teacher but left soon to join law profession in 1953. He started his practice at high court in 1961 and was elevated as a judge in October 1974 and retired in May 1984.

Justice Ajit Singh Bains has headed a committee setup on October 1, 1985 by Surjit Singh Barnala led state government in Punjab. The committee was tasked to look into  2,170 cases involving over 4,120 persons. There were concerns that innocent persons, particularly youth, were arrested on false charges by the police which ran berserk killing scores of people in false encounters. The state police never hid their unhappiness with the committee. Eventually, says Bains, he managed to screen 80 per cent of the cases but as even he admitted: “We had hurdles all the way. The police took its own time and did not put forward all the cases.” 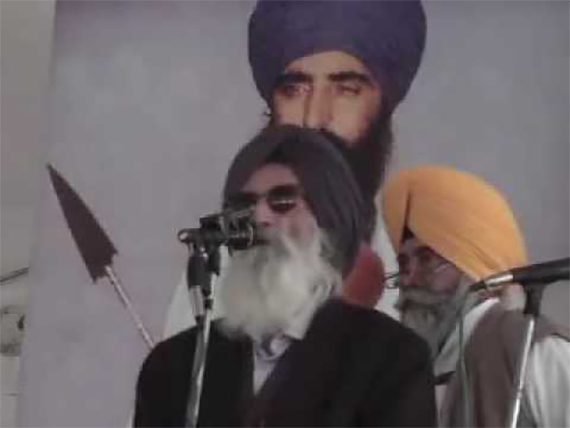 While serving as Chairman of Punjab Human Rights Organization (PHRO), Justice Ajit Singh Bains raised voice against human rights abuses by Indian forces in the state of Punjab, particularly from mid-1980s to mid-1990s.

In 1992, on April 3 Justice Ajit Singh Bains was arrested by police under draconian TADA citing his March 18, 1992 speech at Takht Keshgarh Sahib Gurdwara on Holla Mohalla.  on March 18, he could scarcely have imagined that he was in for precisely the kind of treatment from the Punjab Police which his organisation has been so busy exposing. At the age of 70 he was handcuffed, manhandled, finger-printed and illegally detained by the police. It was only after more than 52 hours of detention and rigorous interrogation that he was produced before a district magistrate on April 5, only to be remanded to police custody for two more days. Justice Ajit Singh was released on bail on 18 August 1992. Justice Ajit Singh’s arrest was widely criticised by international community, particularly by human rights bodies like Amnesty International and International Commission of Jurists.

Justice Ajit Singh Bains remained active through PHRO and worked for human rights in Punjab. His contribution to human rights and humanity will be remembered with respect.