“Human Rights in the Face of Human Wrongs: Conflict in Kashmir and Beyond” Event in London Today

London: The Centre for the Study of Democracy (CSD) within the University of Westminster’s Department of Politics and International Relations is going to host an event related to the Kashmir conflict on April 26. The theme of the event is “Human Rights in the Face of Human Wrongs: Conflict in Kashmir and Beyond”.

“Department of Politics and International Relations, in collaboration with Rafto Foundation for Human Rights, University of Warwick, and UOW’s Kashmir Solidarity Society is organising a conference to cover various struggles and issues connected to righting the human wrongs committed in the name of the nation-state with a specific focus on India in Jammu and Kashmir”, notes a release about the event posted on eventbrite.co.uk. 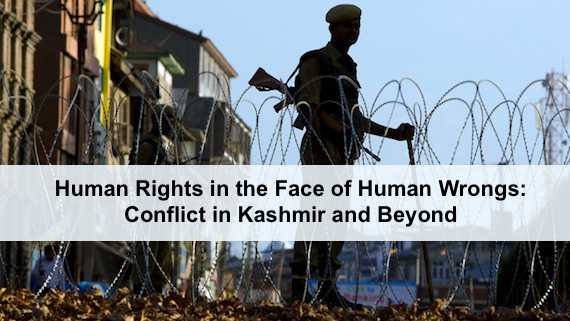 According to a release by CSD, the Centre has a research theme on “Post-Colonial Politics, Development and Emerging Powers” that in addition to other issues, investigates how religion, history, territoriality, political economy, militarization, democratisation and resistance have contributed to a volatile politics that disconnects states and people. There is an explicit focus on engagement with communities and impacting upon public debates around these contentious subjects. Kashmir is one such subject.

Elaborating further about the Kashmir issue, the CSD release says: “While academic discussions around Kashmir remain wedded to approaches that treat it as primarily a territorial conflict between India and Pakistan thus ignoring the experiences of people of Jammu and Kashmir, here at the CSD we adopt a critical approach to understand Kashmir as a site of pain and suffering due to state imposed indignities as well as a site of hope and struggle for human rights including the right to self-determination”.

Kashmiri human rights activist Parveena Ahangar, chairperson of the Association of Parents of Disappeared Persons (APDP), would share her keynote address during this event.

The CSD release notes: “Parveena Ahangar has long been at the forefront of the struggle against arbitrary abuses of power in Indian-administered Kashmir that has borne the brunt of escalating violence, militarisation and international tension. She is one of the many human rights defenders who have waged long campaigns to expose human rights violations, promote dialogue and seek peaceful solutions to the intractable conflict in Kashmir. She, along with Parvez Imroz of JKCCS, has been the recipient of Rafto Foundation’s Prize for Human Rights 2017”.

The programs to be held during this event includes a Roundtable Panel on Challenges of Human Rights Work to be participated by Omaid Nazir (APDP), Dr Frederiek de Vlaming (Nuhanovic Foundation). It will be moderated by Dr Goldie Osuri.

A conversation with Lord Nazir Ahmed will be held on “British Kashmiris, UK Parliament and the Kashmir Issue”.

Dr Nitasha Kaul and Dr Atef Alshaer will be participating on a Panel on the Role of Literature in Conflict: Kashmir and Palestine. This panel discussion will be moderated by UoW Kashmir Solidarity Society.