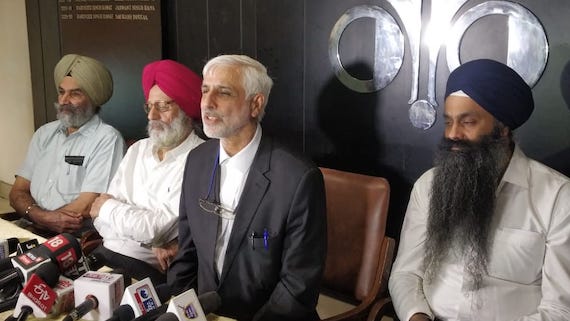 “We are united in our condemnation of the Punjab Government reported decision to recommend to the central government the premature release of Punjab police officers whose names have not been disclosed but have been convicted of heinous crimes during the insurgency and counter-insurgency period, is unlawful, arbitrary and unconstitutional”, lawyers said.

“With the CBI special Court in Mohali, having recently convicted 9 police officers in 4 separate trials, any attempt to release those already serving sentences makes a mockery of the law and undermines efforts to secure justice in the remaining 40 cases which are pending in the CBI Court Mohali or the Punjab and Haryana High Court. In all these cases the victims were found to be innocent and the police officers were found to have killed in cold blood or had abducted and enforced disappeared the victims”, they added.

“We strongly oppose any external attempts by the Punjab or Central Government, or Punjab Police to interfere with the judicial process and prosecutions which were undertaken by the CBI over two decades ago and are now resulting in convictions of police officers who have evaded the law for the last two and half decades,” the joint statement reads.

“We take serious issue, with the contention that a “sympathetic view” or leniency should be shown towards those convicted of these heinous criminal offences, which are aggravated by the perpetrators doing so in police uniform. Whilst the majority of the accused in these cases have never been dismissed from service and have enjoyed all the perks, salaries, in many cases pensions throughout their entire career and have been supported by a secret fund even as convicted criminals”.

“Whereas, the victim families have suffered in abject poverty, with the main breadwinner of their family having been murdered in cold blood and have waited endlessly over 26 years for these trials to commence and conclude, which have been delayed by the manipulation of legal procedures by certain accused police officers and arbitrary stays imposed”.

They demanded that the names approved and/or recommended for release should be disclosed immediately so that the victim’s kin can challenge why this move is arbitrary, illegal and unlawful.

Lawyers said that they will remind the Chief Minister of Punjab, his public commitments to the victims of extra-judicial killings and enforced disappearances that his government would punish and prosecute offenders and that these killers in uniform do not remain above the law. We have every expectation that justice will be done and those serving life sentence.