New Delhi: 2018 will be remembered as a year when India witnessed a massive crackdown on civil society organisations and human rights defenders. In these turbulent times, protection of human rights are all the more important, Amnesty India said on December 10.

“It may seem that the odds are against us at this moment, but human rights have always won and will this time also. The arc of the moral universe is long, as Dr Martin Luther King said, but it bends towards justice. The widespread crackdown on civil society organisations and human rights defenders by the government of India must end immediately,” said Aakar Patel, head of Amnesty India. 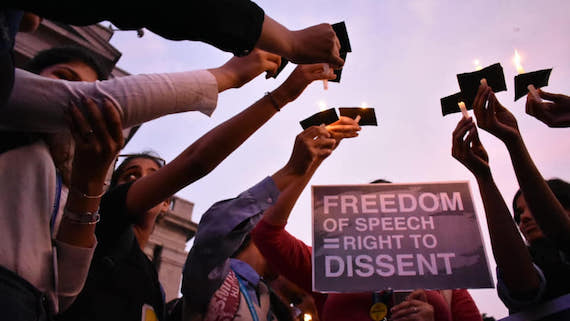 It is better to light a candle than curse the darkness, says Amnesty India on Human Rights Day (December 10)

Marking the 70th anniversary of proclamation and adoption of UDHR, hundreds of people and civil society organisations came together at Jantar Mantar, New Delhi, to reclaim their right to freedom of speech and expression, assembly, and association guaranteed by the Indian Constitution. Prominent activists, human rights defenders, journalists and lawyers joined the event to lend their support to uphold human rights in the country.

Speaking at the public meeting ‘Abki baar Manav Adhikaar’, activist Henri Tiphagne said, “On the occasion of international Human Rights Day we believe we must extend our solidarity and support to all the human rights defenders organisations under attack…We need to stand with organisations like Amnesty India and Greenpeace India and make it clear that we are with them.” 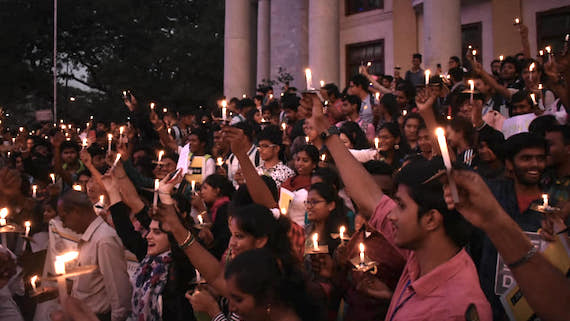 It is better to light a candle than curse the darkness, says Amnesty India on Human Rights Day (December 10)

His words were resonated by other speakers. “We stand in solidarity with all human rights organisations, which have been attacked. The government should know that the more it attacks human rights, the stronger it gets,” said senior lawyer Indira Jaising.

Senior Lawyer Prashant Bhushan, also present at the event, raised grave concerns over the relentless crackdown on civil society and human rights defenders across the country and called for greater vigilance over the coming months. He highlighted the strength of activists currently behind bars or facing a deluge of cases for not wavering in their commitment to uphold constitutional rights. Other speakers included senior journalist Hartosh Bal, activists Nikhil Dey, Anjali Bharadwaj, and Nadeem Khan.

Similar events took place in several cities around the country. In Bengaluru, over 200 people and NGOs protested outside Town hall. People also protested in Mumbai, Hyderabad, Pune and Chennai.

Human Rights Day is observed by the international community every year on 10 December. It commemorates the day in 1948 the United Nations General Assembly adopted the Universal Declaration of Human Rights.

In the past one year, India has witnessed an increasing pattern of demonizing and criminalizing organizations and individuals, who have raised their voices against human rights violations of the poorest and most marginalized communities in India. Actions by the government include the recent raids and freezing of accounts of organizations like Amnesty India and Greenpeace India by Enforcement Directorate thereby effectively stopping their work, arrest of 10 eminent lawyers and human rights defenders under draconian counter-terrorism laws—the Unlawful Activities (Prevention) Act (UAPA), raids on independent news media like Quintillion Media Pvt Ltd for alleged income tax violations, and attacks on journalists and ‘Right to Information’ (RTI) activists, who have been threatened and harassed while seeking state accountability.

Moreover, a slue of repressive laws are regularly used to stifle the rights to freedom of expression, association and assembly. To illustrate:

The National Security Act, 1980 (NSA) permits administrative detention for up to 12 months without charge or trial, ignoring regular criminal justice safeguards. This law has been used to detain Bhim Army leader Chandrashekhar Azad for nearly a year.

Section 499 of the Indian Penal Code on criminal defamation laws have been deployed to harass and intimidate journalists, critics of large businesses, and human rights defenders.

Section 124A of the Indian Penal Code on sedition is an unfortunate vestige of India’s colonial past which has no place in a modern democracy in the twenty first century. Section 124A should does not meet the test of article 19(2) of the Constitution of India.

The Foreign Contribution (Regulation) Act (FCRA) 2010, has been used by successive governments as a political tool to harass groups critical of government actions and policies, particularly civil society organisations and NGOs. In the past, Indian authorities have cited financial ‘irregularities’ and activities that are against ‘public interest’ and ‘national interest’ to cancel NGOs’ foreign funding licences under the FCRA. Some organizations that have been targeted using this law are the Lawyers Collective, People’s Watch, Sabrang Trust and Navsarjan Trust, whose licenses remain suspended or cancelled. While the FCRA makes it extremely difficult for rights organizations to access funding, companies and political parties receiving foreign funds are held to far less restrictions and rarely face repressive consequences.