New York (Press Release): United Sikhs have expanded its Refugee Relief Efforts, with volunteers arriving in Hama, Syria on January 27, 2016 to provide aid to refugees. Hearing the echoes of explosions and gunfire, will not stop our team from serving humanity at this time of need. Hama has more than 1.2 million refugees, which is the largest number of people located in a single district in all of Syria. The specific transitioned camps in which United Sikhs have provided aid are: Naseh Al-Wani, Al Bredi, Al Talmatha Al Baitaresh, Ibrahim Hamoud, Yahya Faraji and Kumhany school.

Our ground team are facing many obstacles, such as foreign environments, lack of electricity and language barriers. With communication being critical our team have been fortuitous to recruit local volunteers to guide them, when visiting camps. In order for our team to distribute food aid we obtained permission for a designated bakery that United Sikhs could use to produce and distribute the chapatis (bread), also called khabuj. Our request needed to be approved by the government office, the registrar, and the local food authority of Hama, Syria. This was an arduous process but did not subdue the relentless efforts of our humanitarian volunteers. 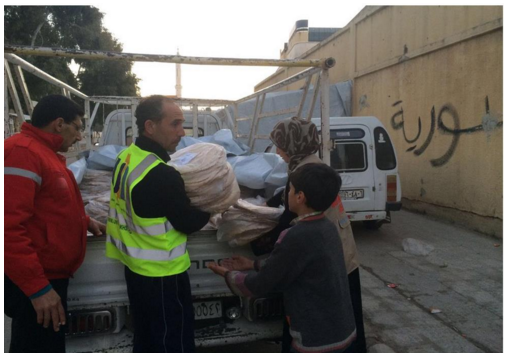 Our team are making a daily strenuous effort to ensure as many chapatis as possible are rolling off the bakery conveyor belt within the two to three hours of dependable electricity.United Sikhs has managed to consistently provide 3,600 meals daily to 400 families, from what is now our designated bakery in Mukhabej Hama, Syria.

Once the chapatis are ready our volunteers begin door to door distribution to each refugee household. As this is the only food which is available to the refugees it is vital that volunteers deliver aid without any delays.

“I decided to come help those who needed help the most, I chose Syria because many organizations help refugees elsewhere. Those that have money to travel; they cross the border and go to other countries. Real poor, helpless, and wounded people are here with nowhere to go”, said Gurpreet Singh United Sikhs Refugee Relief coordinator who is on the on the ground in Syria.

Our other refugee relief mission in Tabanovce, Macedonia is still continuing to feed up to 1000 refugees per day, who are heading towards Northern Europe. By working on both fronts of the refugee migration problem, the scale of this humanitarian nightmare has become clearly evident to United Sikhs. It is hard to comprehend what these refugees are currently going through, whether they flee or don’t flee, their situation remains equally dire.