Humiliation faced by Sikhs; US apologized after Canadian minister was asked to remove turban

Toronto: Humiliation faced by the Sikhs once again comes in news with high authority victim this time, nine other than Sikh Canadian Federal Minister Navdeep Singh Bains. He had passed the usual security checks at Detroit Metro Airport but that was not enough. Then he was asked to remove his turban. 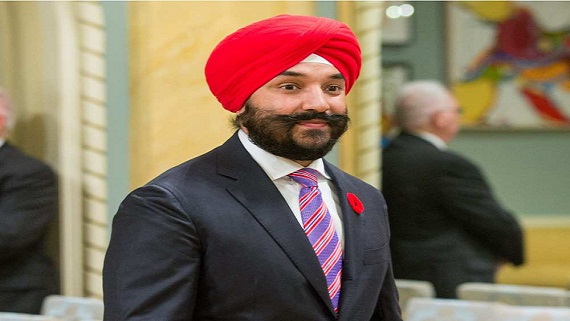 At that point, Canada’s Minister of Innovation, Science and Economic Development Navdeep Singh Bains did something he doesn’t always do — he pulled out his diplomatic passport.

Bains described the episode, which took place in April 2017, in an interview published Thursday in the online newspaper La Presse.

“I went through all the security checks without revealing my identity as a minister,” he said. “I did it knowingly, as is my habit, to understand better what ordinary people are going through when they sometimes have trouble getting along with people in a position of authority.”

Following the incident, officials in Ottawa spoke to the US Embassy there as well as to officials in Washington. Officials with the Transportation Security Administration and the Department of Homeland Security apologized to Canada on behalf of the US government, CNN understands.

Bains said he initially went through a metal detector without any problem, but was then asked to go through an additional security procedure because of his turban.

An agent asked him to go through another screening but the machine was not working properly, Bains said. When it emitted a warning sound, a security officer asked Bains to remove his turban. “I asked him why I had to take off my turban since the metal detector had worked well,” Bains told the newspaper. “I will never be asked to take my clothes off. It’s the same thing. It’s a piece of linen.”

After passing a second test Bains was allowed to continue, he said.

But when he reached the boarding gate, less than 20 minutes before departure, a security guard approached him and said he had to go back to security because protocol had not been followed. He again asked Bains to remove the turban.

“I politely replied that I did not represent a security threat, and that I had passed all security checks. He then asked for my name and identification. I reluctantly handed him my diplomatic passport. “

Bains said he was then allowed to board.

‘It should never become the norm’

“As a Sikh, wearing the turban is considered one of the most dutiful acts for a person of the faith and I am proud to represent my community.

Unfortunately these types of incidents do occur from time to time to minorities in particular. But it should never become the norm,” Bains said in a statement to CNN.

“I will continue to promote diversity and inclusion across the country as our government has done since we took office.”

“We regret the screening experience did not meet the expectations of Mr. Bains,” TSA spokesman Michael McCarthy said in a statement to CNN. “Upon review of airport closed-circuit video, we determined that the officer conducting the screening did not follow standard operating procedures and therefore received additional training.”

The TSA spokesman added that “all persons wearing head coverings may be subject to additional security screening, which may include an officer-conducted or self-conducted pat-down. TSA does this to ensure that prohibited items or weapons are not concealed beneath any type of clothing and brought onto an aircraft. This policy covers all headwear and is not directed at any one particular item or group.”