I am Tara sympathiser, Bluestar critic, but not a terrorist, HT quotes Sunny Khalsa

Bathinda: Ramandeep Singh alias Sunny Khalsa has reportedly returned to his job at an electrical spare-parts shop in the Fauji Chowk market of Bathinda. He was arrested by Punjab police for his alleged links with Jagtar Singh Tara. 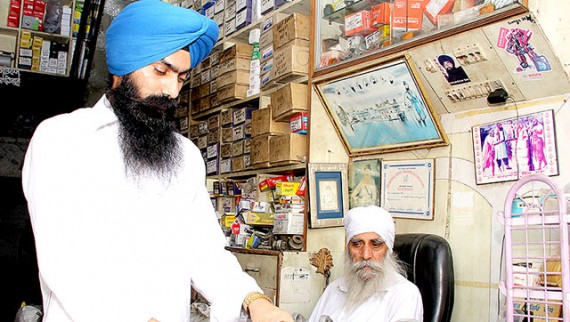 A section of the media might have branded him a terrorist but Ramandeep Singh Khalsa “Sunny” says society has accepted on his return from jail.

Arrested on November 9, 2014, this resident of Bathinda’s Telian Wala Mohalla came out on bail last week and returned to his job at an electrical spareparts shop in the Fauji Chowk market here. Police associate him with militant Jagtar Singh Tara and claim that leads from him had helped trace the Babar Khalsa activist to Thailand this January. “Legal obligation binds me not to speak much about my case. I was implicated and the police have no evidence against me, which is why the court released me on bail,” said Khalsa.

However, he doesn’t hide that he has sympathy for Tara; and he even accuses the police of delaying the militant’s trial. Asked if he faced any discrimination after coming out of jail, Khalsa said: “None. All my friends, whether Sikh or Hindu, came over to see me. The only difference is that police and intelligence people now keep moving around my house and workplace.”

“People’s behaviour towards me has not changed but now I try to avoid visiting friends, as I don’t want them to get into trouble with cops who follow me everywhere,” he said. Asked why the police had picked him to target out of 4 lakh Bathinda residents, he said: “I was at the forefront of organising a special event on the anniversary of Operation Bluestar (June 6) in 2009. I always participated in events related to Sikh issues. Maybe, that brought me into the eyes of the police.”

He says that he stays committed to his views about Sikh issues. “I support Surat Singh Khalsa’s hunger strike for the release of Sikh prisoners. Family wants me to marry and settle down but I have not thought much about future,” said Khalsa. His younger sister is married. Their grandparents brought them up after Khalsa lost his father in childhood.

Note: Italicised text, as above, is verbatim reproduction of a Hindustan Times (HT) news report: ‘I am Tara sympathiser, Bluestar critic, but not a terrorist’, by Kamaldeep Singh Brar. The news report may also be read at it’s source page at: http://www.hindustantimes.com/bathinda/i-am-tara-sympathiser-bluestar-critic-but-not-a-terrorist/article1-1365438.aspx