I Swear Upon God, I Don’t Know What the Referendum 2020 Is: AAP leader Khaira

Chandigarh: Media house ‘The Print’ yesterday published an interview with Aam Aadmi Party MLA and Leader of Opposition in Punjab- Sukhpal Singh Khaira, in which he denied having any knowledge about the so-termed “Referendum 2020” move. Sukhpal Singh Khaira once again maintained that he never supported “Referendum 2020” move and no electronic media could produce any video clip showing him making any statement in support of that movement.

“What I said was, in fact, that there is a very big and growing gap between the Punjabis and the Sikhs and the successive governments in Delhi“, Sukhpal Singh Khaira reportedly said. 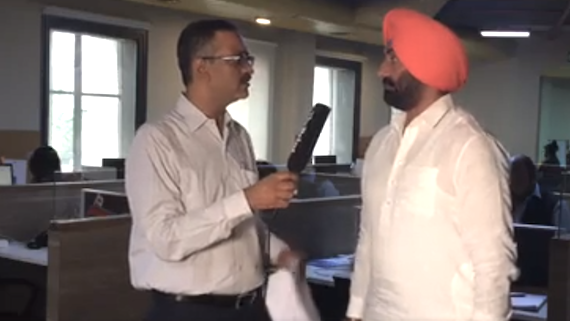 According to interview produced in text by The Print, when he was told to explain the “Referendum 2020” for readers, Sukhpal Singh Khaira replied: “I swear upon God, even I don’t know what that is“.

It is notable that some media outlets had reported few days back that Sukhpal Singh Khaira issued a statement supporting “Referendum 2020” – a propaganda campaign led by Sikh diaspora activists group named Sikhs For Justice, highlighting the Sikh demand for independent state. Soon after that Punjab politicians from mainstream parties in Punjab, including Sukhpal Singh Khaira himself, lined up to express full faith in Indian Constitution and the so-termed ‘unity and integrity’ of the Indian state.

Even though Sukhpal Singh Khaira has been repeatedly saying that he never made any such statement, the discussion on this matter refuses to close down and politicians and media are repeatedly discussing it. Pro-India politicians, who aspire to be next “Subedar” of Punjab are using this issue as an opportunity to win the goodwill of the Centre. Moreover, these politicians and Indian media houses are attempting to further the state propaganda targeting the Sikh right to self determination under guise of condemning or discussing Sukhpal Singh Khaira’s so-called statement. It is observed that as the general elections of 2019 are coming close, Indian media and Punjab politicians have started expressing excessive “interest” in so-termed “Referendum 2020” move.