I was kept in secret custody by Indian agencies, says Punjabi youth who escaped ISIS

Mohali/ Chandigarh: Indian agencies kept Harjit Masih, a Punjab who was abducted by ISIS in Iraq last June, but somehow escaped the death clinches of ISIS, under detention in Noida and Gurgaon at the pretext of threat to his life. He also said that the chances of survival of 39 other persons abducted by ISIS were bleak as they were all shot four or five days after their abduction.

Speaking to the press at the Mohali residence of Aam Aadmi Party MP Bhagwant Mann on Thursday (May 14), Harjit Masih informed media that he had remained in the custody of Indian agencies since last July and was kept at different places in Gurgaon and Noida. He said he was only allowed to return to his home in Kala Sangha village in Gurdaspur district about a fortnight ago. 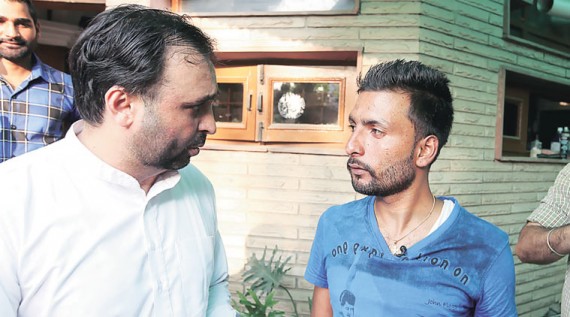 According to Harjit, four or five days after they were taken hostage on June 15 last year, the ISIS took them to a hilltop, ordered them to line up, and shot them from behind. Masih, who was reportedly hit in the right leg, said he dropped to the ground and feigned death. He lay there till the militants left, and then ran for cover.

“I pray and hope that somebody survived like I did. The chances are bleak. It would be a miracle because they all lay in a pool of blood with nobody responding to my calls. Among them, six were from Bihar and two from West Bengal. All the others were Punjabis,” he said.

Masih said after escaping, he stayed with a group of Bangladeshi youths in Iraq for a few days. “After that I contacted the construction company in Irbil where I was employed. They handed me over to the Indian Embassy. They brought me to India where I was kept in Greater Noida and Gurgaon till about two weeks ago… I was told there was a threat to my life from the parents of the 39 hostages. I somehow did not understand this,’’ said Masih.

Indian Minister says she do not believe Harjit Masih:

Reacting to Masih’s claims, External Affairs Minister Sushma Swaraj told ANI today: “I did not believe Harjit Masih’s claims that 39 Indians were killed… I’ve met family members of Indian nationals who are stranded in Iraq, had discussions with them… Harjit Masih is claiming that all of them are dead, but I do not believe him… will continue with the search.”

Sushma Swaraj said that while she earlier had six sources, she now has eight. “The eighth source is reliable, there’s no point in doubting my source. There is only (Masih) who is saying they are dead, whereas eight sources are claiming they are alive,” she said.

Why I was detained in India? asks Harjit Masih

While Swaraj had earlier cited a threat to Masih as the reason for his detention, Masih today said: “When in India, I do not fear the ISIS. I do not know why I was detained by the Indian government.”

“They kept Harjit Masih in their custody because his expose would have caused embarrassment to the Indian government, especially Prime Minister Narendra Modi, who had just taken over. It is quite late now and they thought it would be okay for Masih to narrate the story,” alleged Mann.

“Why was Masih kept in hiding? Sushma Swaraj told the Lok Sabha that Masih was with Indian officials but she never said he was in India,” said Mann.