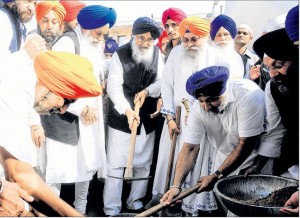 New Delhi, India: A function at Gurdwara Rakabganj Sahib marked the beginning of work on a memorial to the victims of Sikh Genocide 1984.  The memorial will have a wall, water body and a rock. The Delhi Sikh Gurdwara Management Committee (DSGMC) had laid the foundation stone of the memorial last year after the Congress government refused to allot land.

Arun Jaitley said that the government was planning to reopen cases that had been closed for all these years so that the guilty could be punished.

Addressing a gathering at the start of the construction work, Parkash Singh Badal said the 1984 massacres were the fourth genocide (“Ghallu Ghara”) committed against the Sikhs in which thousands of people were killed in Delhi and other cities soon after former Prime Minister Indira Gandhi’s assassination. The first two were committed by Mughal kings at Sangrur and Gurdaspur in which 35,000 and 15,000 Sikhs were killed, respectively.

The third genocide — Operation Bluestar — was committed at Harmandar Sahib in Amritsar. The last two were committed during the Congress rule, Badal added.

“The massacre was orchestrated by political leaders. Those involved in the conspiracy and killings were given security by the then government. It further rubbed salt into the wounds of the Sikh community by giving ministries to the politicians and promoting guilty police officers,” Badal said.

He asked the government to rehabilitate the victims.

“In November 1984, the government forgot the sacrifice of the community during the freedom struggle. They were killed for no fault of theirs,” Badal said.

Deputy Chief Minister Sukhbir Singh Badal said the Sikh nation could not forget the massacres of 1984. “It was perhaps the first time in our history that a government killed its own citizens. The Congress has always tried to divide the Sikh community to weaken it” said Sukhbir Badal.