If murder convicts in Babbar Bashir Mohammad case can be re-inducted to police, why not me: Gurmeet Pinky 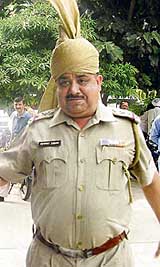 In 2001 Gurmeet Pinky was booked in a murder case in Ludhiana. He was convicted and sentenced to imprisonment for life by a Yamunanagar court on September 30, 2006. The Punjab government granted him premature release in May 2014. Recently, in May 2015, Punjab police made a bid to reinstate him as ‘head constable’ at Fatehgarh Sahib. Sensing the controversial nature of the issue, the Punjab government withdrew DIG GS Dhillon’s order reinstating Gurmeet Pinky.

Gurmeet Pinky alleges that he is being ‘discriminated’ against, as many other convicted police officers, including murder convicts, were re-inducted into Punjab police.

In a recent TV interview Gurmeet Pinky said that police officers who were convicted in Tiljala (Calcutta) case, where the Punjab police personnel had killed Bashir Mohammad alias Babbar Lachhman Singh and his wife in cold blood, were got pardoned by the government from President of India. He said that murder convicts of Tiljala case, who were sentenced to imprisonment for life, are now ‘serving’ at top posts of Punjab police.

It’s an open secret now that Punjab police officers kept “black cats” 1980s-90s to commit atrocities on civilians and defame and discredit Sikh militant movement in Punjab. Many of these cats were inducted into police force. Many, who were not inducted into the police were declared dead whicle showing dead body of some innocent Sikh youth killed by the state police. In 2008 the then Punjab police chief Sarabjit Virk had admitted that he was “rehabilitated” around 300 police cats under false names after they were (falsely) declared as dead by the police.

Police atrocities and Crimes against Humanity in Punjab:

It is well documented in various documents and reports by human rights groups of international repute that the Punjab police was involved in commission of crimes against humanity in Punjab under the garb of counter insurgency operations.

The black deeds of Punjab police also find mention in US diplomatic cables leaked by Wikileaks.