Birmingham, UK: An international conference, organised by the World Sikh Parliament’s UK chapter, has issued a demand that warmongers in South Asia pull back from a war that threatens catastrophic outcomes. Instead, India and Pakistan need to resolve their disputes through dialogue and work towards stability in the region by including all those stateless nations that are stakeholders in peace. 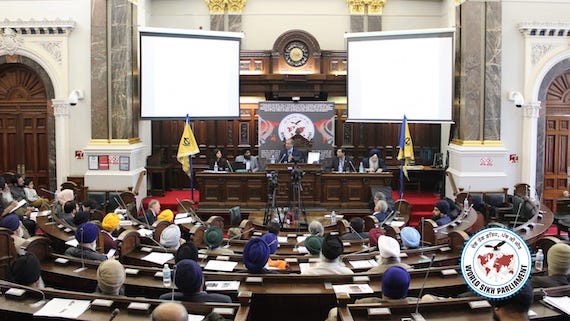 World Sikh Parliament (UK Chapter held an international conference in Birmingham on May 11, 2019

Held at in the Chamber of the Council House in Birmingham on May 11, 2019, the conference heard from experts, political representatives and human rights defenders. It urged the UN and the wider global community to intervene in order to prevent a potentially catastrophic war that could easily kill tens of millions. The recent tensions and military encounters between India and Pakistan, driven by the incessant warmongering rhetoric of right-wing political parties in the ongoing Indian general elections, have brought the region to a dangerous tipping point. Indian PM Modi has even been making public threats that his nuclear weapons are not just for displays at Diwali. With war planes recently downed there are many bruised egos looking for retribution. 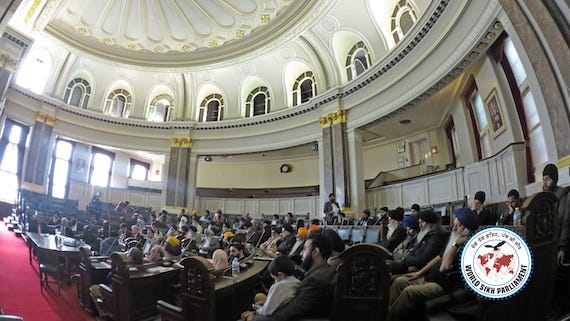 Another view of the conference

Noting that the Sikhs, as a nation, are not a party to the Indo-Pakistan dispute and yet would suffer the most as Punjab would be the likely theatre of such a war, the World Sikh Parliament (WSP) has called for all would-be combatants to undertake that the Sikh population, homeland and holy sites will not be used or targeted in any military conflict. 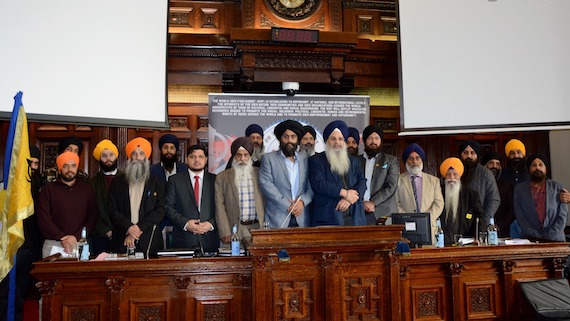 A group photo taken after the Conference

Ranjit Singh Srai (Council of Khalistan and WSP member), who conducted proceedings, said the way forward was instead to resolve underlying conflicts, in line with international law and the fundamental human right of self-determination, so that the aggression over artificial borders became a thing of the past. Manpreet Singh (WSP Coordinator) said both Kashmir and Indian-controlled Punjab have seen legitimate freedom movements suppressed by brutal state terrorism for decades; neither of those conflicts have been resolved and both are directly linked to massive militarisation of the Indo-Pak border that has driven the arms race in what is widely accepted as being the most dangerous place in the world. 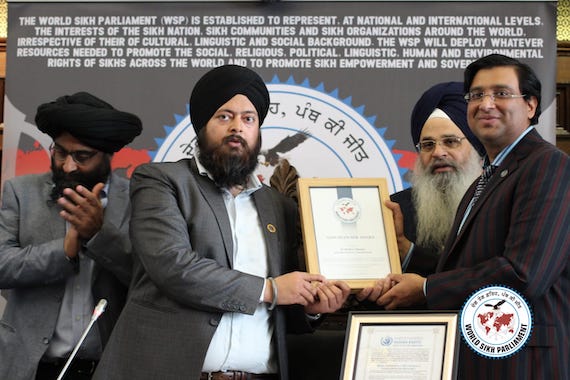 Dr Iqtidar Cheema, an advisor to the UN on the prevention of genocide and atrocity crimes, said the application of the right of self-determination to creation of buffer states would separate India, Pakistan and China in that volatile region and is the only viable way of getting those nuclear- weapons states, with historic enmities, to disengage. The WSP took the opportunity to honour Dr Cheema by presenting him with an award for his exceptional work over recent years to create global awareness of the Sikh scriptures as well as the Sikh nation’s human rights concerns. 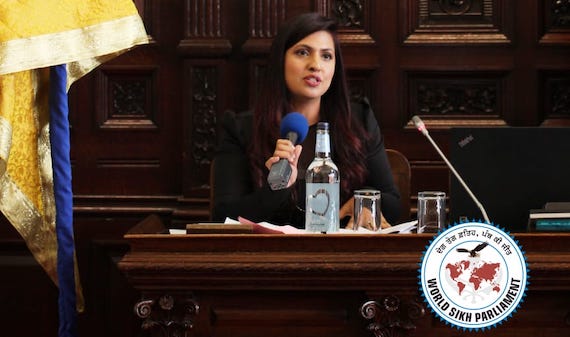 Dr Annie Waqar of the university of Westminster stated that such disengagement has become an imperative for world peace and the UK, as the former colonial power’s whose chaotic exit in 1947 created the underlying issues, should take the lead at the UN to galvanise international action. She emphasised the need for world powers to engage with the Sikh nation and Kashmiris, so that their aspirations were satisfied in coming to a just dispensation.

Dr Rev John Joshva (Academic Co-Dean, Oxford Centre for Religion and Public Life) called for states in the region reign in right winger leaders by legislating against use of nuclear weapons and to respect of self-determination. It was time he said to think outside the box in saving humanity as all men of God, of whatever faith, are duty bound to do.

Joga Singh (Coordinator, WSP) read out a special statement from Amar Singh Chahal, spokesman of the Jagtar Singh Hawara, (political prisoner and Jathedar of the Akal Takht) in which the warmongering of the Indian state was roundly condemned and contrasted to the measured statesmanlike response of Pakistan PM Imran Khan. The statement highlighted the need for international intervention to avert yet another disaster being visited on the Sikhs after the horrors of 1947 and 1984.

Professor Nazir Shawl (Kashmir Concern) referred to the massive, systematic violations by Indian forces in Kashmir which the UN’s High Commissioner on Human Rights had detailed in a damning report in 2018; he said that whilst such oppression would never end the freedom struggle it risked a military conflagration that the world cannot afford.

In a message to the conference organisers, John Spellar MP wrote “We are rightly concerned that escalation could lead to major conventional conflict across the border and the geography of the region means that this would most likely be in the Punjab. Naturally the Sikh community have deep concerns at the threat this poses to their families in the Punjab. This is quite apart from the issue that both countries have nuclear capability and the consequences of this being used are horrendous”. He has written to the UK Foreign Secretary seeking action, particularly at the UN, to ensure there is no war.

Phil Bennion (Vice Chair of Liberal Democrat party’s International Relations Committee) said it was time to push for buffer states, respecting the right of self-determination, to separate belligerents whose nuclear arsenals threated the entire region and beyond. He suspected that de-escalation would follow the completion of the Indian general election. Anthea McIntyre, MEP said the conference was very timely and important at a dangerous moment in South Asia. Having recently visited Kashmir she spoke of the terrible human rights abuses there and said we should all see those abuses as an affront to us all. The EU needed to pay more heed to rights, including the right of self-determination for the Sikh nation and for Kashmiris – just as the UK had freely allowed Scotland to determine its own destiny.

Gurpreet Singh (Saving Punjab) outlined the myriad threats facing Punjab such as drugs and the desertification of the region – a tragic irony for the land renowned for its rivers – which he said were the manifestation of a deliberate attempt to destroy the Sikh homeland. He said the Sikhs were, for India, expendable and the threat of a new war was just one more layer of the existential threats India has posed to the Sikh nation. He demanded that war must be taken off the table following repeated wars between India and Pakistan, as neither Sikhs nor Kashmiris want war in their homelands.

Professor Nazir Ahmed Shawl also urged international intervention to stop rabid Hindutva forces from dismantling peace in South Asia. The right of self-determination is not conditional. The people in Kashmir and Punjab will not bow to the fascist ideology of PM Modi’s BJP but international law and mechanisms must now be deployed for meaningful peace building.

Graham Williamson (Nations without States) said a condition of peace was respect for self-determination and national sovereignty; in this case of the Sikhs and the Kashmiris. Most armed conflicts today are attributable to the suppression of such struggles; the need is for UN supervised referenda resolve them through peaceful means. Four major wars between India and Pakistan was testimony to the fact that peace is a pipe dream until freedom is secured.

Dr Gurnam Singh (Coventry University) said the consent of the governed is crucial; he quoted Dr Martin Luther King in demanding the rights of human beings. Populist authoritarianism, fascism and hatred must be rejected and self-determination and dignity are the keys to peace and security. Muzzammil Ayyub Thakur (The Justice Foundation: Kashmir Institute of International Affairs) said peace was not possible without self-determination. He said unity was needed to defeat the fascist agenda of Hindutva forces which are suppressing the legitimate freedom struggles in Indian-occupied Kashmir and Punjab. Faheem Kiyani (Tehreek-e-Kashmir) spoke forcefully for the right of Kashmiris to resist India’s oppression and the need for Sikhs and Kashmiris to unitedly work for freedom in their homelands.

Jaspreet Singh (National Union of Students) said we need to understand the mentality of oppressive elites that dehumanise the people; the ongoing oppression of Kashmiris by Indian forces is unacceptable. He said the liberation of Khalistan will give the Sikhs an opportunity to demonstrate how a just order can be established where no one will be persecuted. He read out a message of support for the conference from Jagroop Singh (Convenor, All India Sikh Students Federation) which reiterated the Sikh nation’s pursuit of Khalistan. Simranjeet Singh (Aston University Khalistan Society) said no external power had the right to turn the Sikh homeland of Punjab in to a war zone; the UN must recognise the Sikh nation as stakeholder in peace in the region and help facilitate self-determination both there and in Kashmir to deliver regional peace and security with a global peace dividend.

Amrik Singh Shaota, OBE (Council of Khalistan) said the events of recent months had validated the decision of the Sikh nation to declare independence on 29thApril 1986; the creation of a buffer state in Punjab would prevent a calamitous conflict between India and Pakistan and was the only viable solution, along with freedom in Kashmir. Kulwant Singh Mutadda (Shiromani Akali Dal (A)) urged Sikhs and Kashmiris to pursue their birth right of freedom and bring real peace to the region. Irfan Tahir urged global action to prevent war via dialogue, underpinned by self determination in Kashmir; justice demanded that world powers needed to understand this rather than mindlessly sell lethal weapons of war to warmongers.

Dupinderjeet Singh (Sikhs for Justice) focussed on the right of giving the right of self-determination some practical manifestation in the absence of an effective UN mechanism to facilitate it. Urging support for SFJ’s ‘Referendum 2020’, a non-governmental referendum on the independence of Indian-occupied Punjab so that the Sikhs could, as was recently done in Kurdistan and Catalonia, demonstrate to the global community their demand for freedom.

Messages of support of the peace mission behind the conference were received from Salma Yaqoob (Patron, Stop the War Coalition), Robin Marsh (Secretary General, United Peace Federation, UK chapter), Rana Nazir (British Kashmiri Women Council), Kaleem Hussain (prominent peace activist), Parminder Singh (Voices for Freedom, USA) as well as Liz McInnes MP. Conference resolutions were adopted that underlined the ‘stop the war’ message of the conference and calls for the implementation of the right of self-determination in Punjab and Kashmir. The UK government in particular was urged to take a lead in raising these demands, on behalf of some 1.5 million Sikhs and Kashmiris in the UK, both bilaterally and at the UN.