New Delhi: Greenpeace activist Priya Pillai on Thursday (Feb. 19) refuted in Delhi High Court, government’s charge of being anti-India by maintaining that she was against a company and her off-loading from a London-bound aircraft amounted to curtailing freedom of speech and expression.

The government, however, said “she had plans to testify on the alleged violations of forest rights of indigenous tribal people in the Mahan coal block area” of Madhya Pradesh at a meeting with the British all-party parliamentary group. 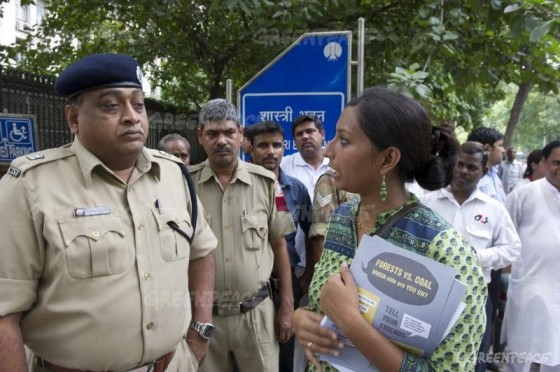 Countering this, senior advocate Indira Jaising, appearing for Pillai, said “simply because one acts to enhance interests of certain group or community, it cannot be deduced as anti-India activity or secessionism.

“Pillai espouses the rights of tribals who are a part of the Indian Union. I (Pillai) am against a company (Essar) not against the country”, she told a bench of Justice Rajiv Shakdher which reserved its judgement.

The judge said he would pass the order on the plea in which Pillai claimed that her right to freedom of speech and expression was being curtailed by an unlawful order of the executive.

37-year-old Pillai was stopped from flying to London on January 11 on the basis of a look-out-circular (LOC) issued by Intelligence Bureau (IB).

She has sought permission to travel to London to make a presentation before British MPs on alleged human rights violation at Mahan in Madhya Pradesh which, she claimed, was the reason for her being taken down from the flight at the IGI airport in Delhi.

Justifying the government’s decision, additional solicitor general (ASG) Sanjay Jain had argued that the situation had “potential for mischief” against India’s economic interests.

The ASG had claimed that diplomatic relations were “fluctuating” and existing good relations were no guarantee against “something undesirable” later.