Bengaluru: The Indian authorities should ensure that documenting and updating the names of citizens in the northeastern state of Assam is transparent and nondiscriminatory, Human Rights Watch and Amnesty International India said today. The potential exclusion of over 4 million people, many of them Muslims, raises concerns over arbitrary detention and possible statelessness without due process.

On 30 July 2018, the Assam state government published a draft of the National Register of Citizens (NRC), aimed at identifying Indian citizens and legitimate residents following repeated protests and violence over irregular migration from Bangladesh. The register only lists those people as citizens who can prove that they or their ancestors entered India before midnight on 24 March 1971 – the eve of the war that led to the creation of Bangladesh. The process to update the register, which various political parties and ethnic groups in Assam have demanded, is being monitored by the Supreme Court. 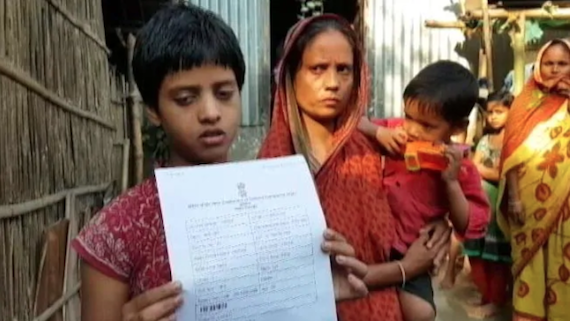 “Assam has long sought to preserve its ethnic identity, but rendering millions of people stateless is not the answer,” said Meenakshi Ganguly, South Asia director at Human Rights Watch. “Indian authorities need to move swiftly to ensure the rights of Muslims and other vulnerable communities in Assam are protected from statelessness.”

The government has said that this is a draft list and those whose names are missing from the register have until 28 September 2018 to seek a correction. “No one will be sent to detention camps,” said Assam’s finance and health minister, Himanta Biswa Sarma. “Rights or privileges will not be taken away from them just because their names have not appeared in the draft NRC.” The central government has also said that after the final list is published in December, applicants left out will have an opportunity to seek a correction from the Foreigners Tribunals.

However, the government has not formulated an official policy for those people who are excluded from the National Register of Citizens and declared foreigners by the tribunals. In December 2017, Sarma said that, “the NRC is being done to identify illegal Bangladeshis residing in Assam,” and that “all those whose names do not figure in the NRC will have to be deported.”

However, Bangladesh has not agreed to claims that these people are irregular migrants, making deportation to Bangladesh unlikely. India does not have an agreement on deportation with Bangladesh.

Irregular migration from Bangladesh has long been a volatile issue in Assam and concerns over the inclusion of these so-called “illegal immigrants” in electoral rolls has grown in recent years. Assam has a long history of armed groups targeting those considered outsiders to protect the claims of “indigenous” citizens.

In May 2018, protests erupted in Assam over a Citizenship Amendment Bill, which would grant citizenship to Hindus, Sikhs, Buddhists, Jains, Parsis, and Christians from Afghanistan, Bangladesh, and Pakistan. While the proposed law deliberately excludes Muslims, including Shia and Ahmadiyya who also face persecution in Pakistan, many groups in Assam fear that this will increase influx of Hindu Bangladeshi migrants to the state.

“The NRC should not become a political tool to render stateless people who have been living in India for decades and have established strong links with the country,” said Aakar Patel, Executive Director of Amnesty International India. “During the process of claims and appeals, the state government should ensure that the people excluded from the NRC are not deprived of any government services, nor targeted or stigmatized in any manner.”

Assam’s National Register of Citizens is being updated for the first time since 1951, and has so far verified 28.9 million people as citizens out of 32.9 million who applied. The verification process collects two sets of documents from residents of the state. List A is legacy data, which includes the 1951 NRC and electoral rolls up to 1971 to prove that the applicant’s ancestors lived in Assam before 1971. List B documents – for instance birth certificates – establish the relationship of the applicant to the List A documents of their parents or grandparents. The NRC then verifies the documents, ostensibly creating a family tree for each applicant.

Fact-finding reports by civil society groups and the media indicate that the NRC process is not free from error or bias. According to several reports, even people with legitimate documents proving their citizenship status have not been registered because of technical reasons such as spelling mistakes or different names being used in the various documents. Sometimes, several people with the same name show up in old records, creating confusion, said NRC officials.

Millions of Indians in Assam, often surviving on basic subsistence, have no access to historical documentation to establish citizenship claims.

Changes in requirements for documents and notifications from the NRC authorities have also plagued the process. For instance, in March 2017, the Gauhati High Court ordered that a residency certificate issued by the panchayat secretary – an elected local official at village level – has no statutory basis and cannot be used as a linking document. This was a considerable setback for over 5 million married women who had reportedly used it to establish their connection to their parents. In December 2017, the Supreme Court modified it, allowing the use of the document, subject to verification of its authenticity.

The NRC allows those deemed “D” or “doubtful” voters to apply for inclusion but does not include their names unless the Foreigners Tribunals – statutory authorities set up to detect “illegal immigrants” in Assam – declare them as non-foreigners.

However, in May 2018, the state coordinator for the NRC sent a notice to all districts saying that siblings and other family members of “declared foreigners” will also be put on hold and not included in the NRC until the tribunals decide their fate. He also sent an order to the border police authorities, requiring them to refer family members of “declared foreigners” to the Foreigners Tribunals. The order did not mention the police’s duty to conduct a prior inquiry before referring someone to a tribunal. Once a person’s case is referred to a tribunal, they can no longer be included in the NRC until their citizenship has been determined.

In June 2018, four United Nations human rights experts sent a letter to the Indian government raising concerns over the NRC process being discriminatory “in light of the history of discrimination and violence faced by Muslims of Bengali origin due to their status as ethnic, religious and linguistic minority and their perceived foreignness.” The letter also raised concerns over the Foreigners Tribunals disproportionately affecting and targeting Bengali Muslims. The letter pointed to allegations that there had been a notable and significant increase in the tribunals’ findings of foreigner status as a result of the new Bharatiya Janata Party-led government coming to power, resulting in large numbers of Bengali Muslims ending up stateless or at risk of detention.

Currently, six jails in Assam double up as detention centers, holding more than 1,000 people. The state administration has received permission to open a stand-alone detention center to house 3,000 detainees. A fact-finding report by the special monitor of minorities of the National Human Rights Commission found that detainees live in these centers with no prospect of release, without adequate legal representation, flouting domestic and international law. In the absence of guidelines as to the rights of these detainees in the state, these centers are administered like prisons and the detainees treated as convicted prisoners. However, they do not enjoy the rights of the prisoners to parole, waged work, and are not allowed out of their barracks even in the day.

The report found that the detention centers also separated children from their parents. It noted cases where a child was declared Indian and both parents foreigners. A child under 6 is allowed to stay with the mother in the detention center, but the legal handling of children above 6-years-old remains unclear.

The UN Working Group on Arbitrary Detention has stated that asylum seekers or immigrants should be placed in custody specifically intended for this purpose or, when for practical reasons, this is not the case, they must be placed in premises separate from those for persons imprisoned under criminal law.

Human Rights Watch and Amnesty International India have long advocated against the unnecessary use of immigration detention, particularly of families with children.

India also has international obligations under the International Covenant on Civil and Political Rights and the International Convention on the Elimination of All Forms of Racial Discrimination to ensure protection of the rights of all and prevent deprivation of citizenship on the basis of race, color, descent, or national or ethnic origin.