India-Naga Talks: Centre Says No Separate Flag or Constitution; Reports Say NSCN (I-M) May Be Left Out from Final Deal

Chandigarh: Reports in Indian Media say that the Government of India was ‘determined’ to “honourably conclude” the talks with Nagas and final draft of deal was ready which could be sealed by the end of October.

R. N. Ravi has openly criticised NSCN (IM), the largest of armed Naga groups. Reports in the Indian media say that the GoI may leave out NSCN (IM) from the Naga deal.

In a statement issued on Saturday, R. N. Ravi reportedly said: “[T]he Government of India is determined to conclude the Peace Process without delay. Endless negotiation under the shadow of guns is not acceptable. The Government of India expects all negotiating parties to heed the will of the people, and facilitate conclusion of the Naga Peace Process within the stipulated time”.

“A mutually agreed draft comprehensive settlement, including all the substantive issues and competencies, is ready for inking the final agreement,” the statement reportedly reads. 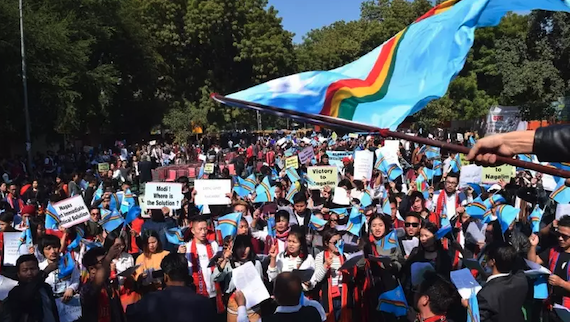 “Unfortunately at this auspicious juncture, the NSCN(I-M) has adopted a procrastinating attitude to delay the settlement raising the contentious symbolic issues of separate Naga national flag and constitution on which they are fully aware of the Government of India’s position. They have mischievously dragged in the Framework Agreement and began imputing imaginary contents to it,” Ravi’s statement said.

A report in Hindustan Times (HT) says: Barring the NSCN(IM), several other insurgent factions, including NSCN (K for Khaplang), NSCN (U for Unification) and NSCN (R for Reformation) are on board a final deal.

As per reports, among those who attended Friday’s meeting with Ravi were top leaders of all the 14 Naga tribes, the minority non-Naga tribes, the Nagaland Tribes Council (NTC), church leaders and village headmen from Nagaland.

Secretary of the the NTC, Theja Therieh, reportedly told The Indian Express, “The meeting was overwhelmingly positive. We should go ahead with whatever is on the table within the stipulated period of time. Any contentious issue can be kept alive, open for negotiations in the future. But we need to wrap up and bring the talk to conclusion…”

The NSCN(I-M) in a statement on Thursday said, “The Government of India and her agencies on the other hand are at work sleeplessly to exploit our vulnerabilities to pull away many Naga individuals or groups with monetary baits and other highly rated economic packages… selected few civil society groups are going extra vocal, putting pressure upon the stakeholders to sign off the agreement within the time limit set by the Prime Minister of India notwithstanding whatever is to be lost.”

An observation passed in a report by the Indian Express reads: “The POSSIBLE inking of the agreement without the consent of the most influential group, the NSCN(I-M), may defeat some of its purposes. There was violence when the Centre tried something similar with the Shillong Accord of 1975, when the Naga armed movement was divided into factions, leading to further conflict. The interlocutor’s statement reflects the government’s impatience for a solution to the Naga question, but a hasty exit may prove all efforts made by the government so far worthless”.

The Narendra Modi led government had signed a framework for agreement with NSCN (IM) on August 3, 2015.