Chandigarh: A few days back there was a huge outcry against East Punjab cabinet minister Navjot Singh Sidhu for hugging Pakistan’s army chief Qamar Javed Bajwa. Indian media and politicians termed his act as an insult to the India and thus ‘treasonous’. An advocate named Sudhir Kumar Ojha filed a sedition complaint against Navjot Singh Sidhu in the court of Chief Judicial Magistrate (CJM) Hari Prasad alleging that hugging Pakistan’s Army chief was an act of sedition because many Indian soldiers die in confrontation with Pakistani soldiers. 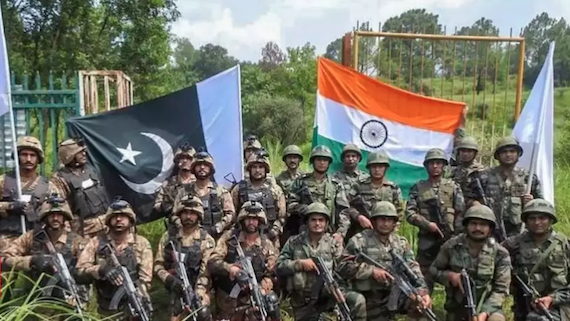 But now when the Indian soldiers are going to participate in a joint military exercise with the Pakistan soldiers, the Indian media, Indian politicians and ultra-nationalists seem to have gone in ‘mute mode’.

It is learnt that Indian and Pakistani soldiers are set to exercise together as part of a multi-country ‘counter-terror wargame’ under the aegis of the Shanghai Cooperation Organisation (SCO) in Russia.

The exercise Peace Mission-2018, in which soldiers from China, Russia and other SCO countries are also participating, kicked off at the 255 Combined Arms Range at Chebarkul in the Chelyabinsk region of Russia on Friday.

Many Sikh groups had condemned the outcry of against Navjot Singh Sidhu on the issue of meeting with the Qamar Javed Bajwa maintaining that pseudo Indian nationalist were raking up the unnecessary controversy just to serve their ulterior motives and support their ultra-nationalist agenda. Khalra Mission Organization had said that ‘Navjot Singh Sidhu was being made a scapegoat and the real target were the Sikhs’.