New Delhi: An Inspector General of Police, serving with the CRPF in the North East, has raised several questions regarding an encounter carried out in a joint operation by the Army, Assam Police, CRPF and the Sashastra Seema Bal (SSB) in Chirang district of Assam in the early hours of March 30 this year.

In his report sent to CRPF headquarters in Delhi, Gujarat cadre IPS officer Rajnish Rai, currently posted in Shillong with CRPF as IG, North East Sector, has alleged that the encounter — neat Simlaguri village under Amguri police station — that led to the death of two suspected members of the National Democratic Front of Bodoland (Songbijit), or NDFB(S) faction, was staged. And that the two men were picked up from a house in D-Kalling village and killed in cold blood in Simlaguri.

Calling for a full-fledged investigation, Rai has alleged that weapons were planted on their bodies. 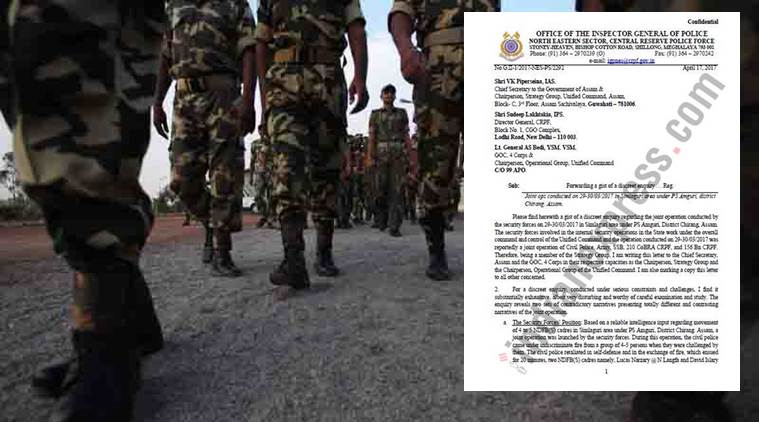 He says he has witnesses who have identified the bodies as those of the two men who were picked up and that these witnesses are in his safe custody.

The salient points made in the Rai’s report:

* GPS records show how a CRPF unit of the CoBRA visited the encounter spot in Simlaguri a few hours before the encounter. “It leads to the suspicion that the CoBRA (CCCC) team was trying to identify a suitable location where the alleged encounter with the NDFB(S) cadres could be stage managed,” Rai’s report says.

It refers to “discreet” enquiries by senior officers who contradict the official version of the events.

* It cites statements of witnesses who have identified the photograph of the two slain cadres as the men picked up from D-Kalling village on the night of the encounter. Rai has not attached their statements to protect the identity of the witnesses but claims they would be presented to an independent investigation team.

* An 11-year-old boy was present in the house from where the suspected NDFB(S) men were picked up. This boy, says the report, was taken away by a woman who lived in the adjacent house even as the operation was on.

* The report suggests that a team (of Assam police and Army) picked up the NDFB(S) cadres from D-Kalling village and then met another team at Ouguri. It was then that the decision to kill the duo was taken.

Note: Above report was originally published on The Indian Express under title: “CRPF IGP says fake encounter in Assam by Army, police, his force” written by Deeptiman Tiwary at source url: http://indianexpress.com/article/india/crpf-igp-says-fake-encounter-in-assam-by-army-police-his-force-4670809/. It’s reproduced as above for the information of readers of the Sikh Siyasat News (SSN).