Sangrur/ Chandigarh: According to a news reported by IBTimes an Indian Army soldier opened fire indiscriminately in Punjab on Tuesday and left at least seven civilians injured.

The armyman, who has been identified as Jagdeep, opened fire in Punjab’s Sangrur area, according to ANI news agency.

Several civilians in the area were injured in the incident. 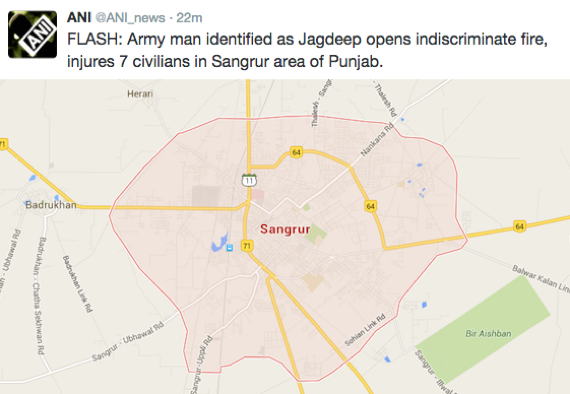 IBTimes quote some news updates to report that the army man stood on the roof of his house and opened fire.

Punjab is already seething after days of unrest in wake of incidents of Beadbi of the Guru Granth Sahib.

It was not known at the time of writing this news that whether the firing incident was related ongoing protests or not.

Sikh Siyasat News (SSN) is trying to reach out sources in Sangrur to get more details on this incident.

UPDATE: Local sources told Sikh Siyasat News (SSN) that the fire was opened by an armyman over a family dispute. This firing incident has no relation to ongoing Sikh protests in Punjab.

North Gazette quotes Sangrur SP Jaskiranjeet Singh Teja told that seven persons suffered injuries in the indiscriminate firing by Army man over a family dispute and they were rushed to hospital by their relatives.

“Three of them succumbed to the bullet injuries in the hospital while four persons are undergoing treatment at the hospital and their condition is said to be serious,” police officials said.