New Delhi: Addressing a gathering of students in Jawaharlal Nehru University (JNU) on the occasion of International Women’s Day, JNUSU president Kanhaiya Kumar said he would raise his voice against human rights violation and AFSPA [Armed Forces (Special Powers) Act] in Kashmir. He said that though he has respect for soldiers but its a fact that Indian army do rape women in Kashmir 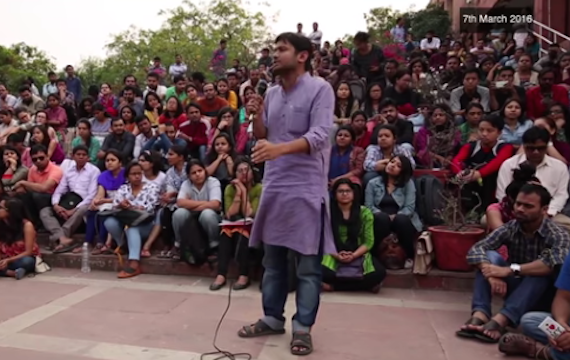 Kanhaiya Kumar was arrested by the Delhi Police on February 12 on charges of sedition in relation to alleged anti-India slogans raised by some unidentified persons during a cultural event organised on the campus on February 9 to commemorate the third anniversary of the hanging of Kashmiri national Afzal Guru.

Certain sections of media have raking out the issue of Kanhaiya Kumar’s statement terming it as an another attempt to spread anti-India feelings.