Srinagar: Indian authorities have reportedly imposed restrictions in and around city centre Lal Chowk in order to prevent the JKLF called funeral prayers in absentia of Amanullah Khan. The restricts were imposed earlier today (April 29). Amamullah Khan had passed away yeaterday in Pakistan.

As per media reports the restrictions were imposed on pedestrian and traffic movement in Lal Chowk and adjacent Maisuma locality of Srinagar after Jammu and Kashmir Liberation Front (JKLF) chief Yasin Malik announced the funeral prayer in absentia procession of one of the founders of his group, Amanullah Khan, aged 82. 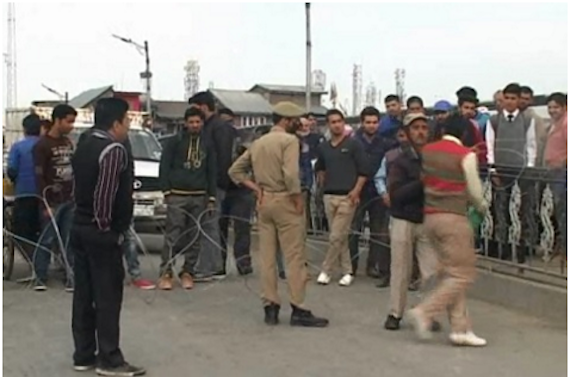 The authorities have ordered the closure of traffic, shops, educational institutions and otter businesses.

People, especially local businessmen, were seen arguing with the policemen standing behind a barricade of concertina wires at Amira Kadal bridge.

JKLF chairman Yaseen Malik was arrested from his residence in the morning and all roads leading to clock tower in Lal Chowk were blocked with concertina wire. Hurriyat leader Mirwaiz Umer Farooq was also detained, reports Economic Times.

he state government’s decision not to allow the prayer meet provoked some political reactions.

Opposition party National Conference’s spokesman Junaid Azim Matoo wrote on microblogging website Twitter, “‘Battle of Ideas’ just as promised by @jkpdp, a party which couldn’t muster the courage to condole his demise either.”