Hoshiarpur: Repeating the phrase that Indian Constitution continues to haunt the Sikhs, the pro-freedon group Dal Khalsa said that it denies the distinct status of the Sikhs and had failed to redress our legitimate problems and provide justice to the Sikhs.

Terming it black republic day, the organization will organize a protest rally on Jan 26 at Mansa. Party head H S Cheema, Paramjit Singh Tanda and Baba Hardeep Singh said it was the successive governments of India, that have betrayed the Sikhs when they failed to honour the promise made by Pt Jawahar Lal Nehru that the Sikhs too would be allowed to experience the “Glow of Freedom”. 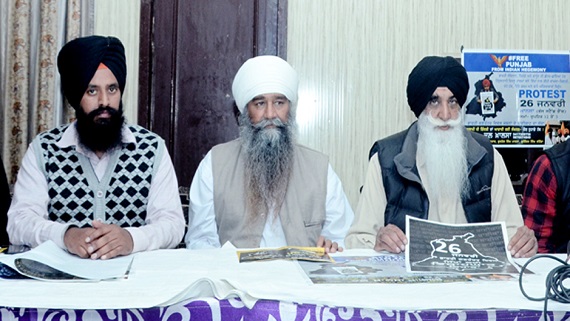 We have no animosity with India or its people but under the shadow of the Indian Constitution, the rulers of this country have heaped grave abuses on our people in Punjab that include mass killings, enforced disappearances, torture and sexual abuse to political repression and crushing of dissent.

The group calls upon the masses of Punjab to boycott Indian Republic Day celebrations and stay back at home on January 26th in protest. While the Hindustani masses will celebrate this Day, we appeal to our people to stay home and reflect on the history of the dark shadow which this constitution of India has brought over our Punjab for the past 68 years.

Apparently, the group also expressed full support and solidarity with the Hurriyat Conference and dissenting voices of the ‘seven sister’ states of the North East who have given the call for boycott on this day to register their protest.

We express our solidarity with all those engaged in the common struggle to put to end the autocratic and centralized structure of Indian polity as well as hegemony of India’s majority community. We reiterate our commitment to carry on with our struggle for right to self determination through legitimate and political means, Dal Khalsa notes.