Jalandhar, Punjab: A release by the All India Sikh Students Federation (Peermohammad) say that AISSF today led a candle light march in Jalandhur, Punjab to mark World Human Rights Day and took the opportunity to lambast India’s appalling human rights record. Citing the deaths of hundreds of thousands of Sikhs and other minorities as a result of state terrorism since the 1980s, the protestors also pointed to the bewildering array of fundamental international human rights legal standards which India openly defies.

On the occasions of Universal Human Rights Day, Federation announced to join campaign to abolish article 25 (b) of the Indian constitution following the “directives” of Akal Takhat Sahib, the highest temporal seat of Sikhism.

On December 8, Jathedar Giani Gurbachan Singh issued a directive to the Sikh community to support Federation in their quest to abolish Article 25 (b) which label “Sikhs as Hindus”. 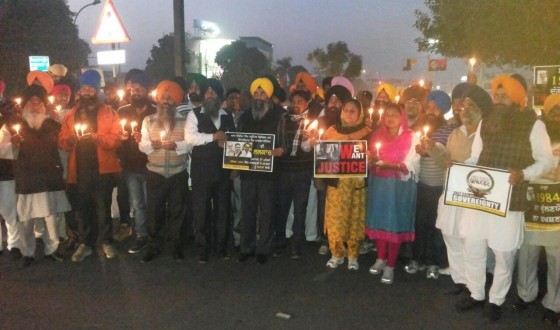 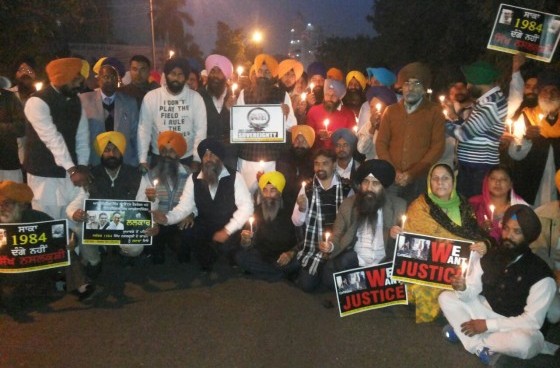 India’s refusal to accept Article 1 of the 1966 Covenants on Human Rights, which establishes the right of self-determination as the most basic, collective human right. India’s official rejection of  Peermohammad said the ‘charge sheet’ against India is damning and he challenged the so-called ‘mainstream’ Indian media to focus – on World Human Rights Day at least – on the gravity of the breaches of international law. Key amongst these he argued were:-

1.this core human right has led directly to massive conflicts causing untold death, destruction and misery. The UN’s own Human Rights Committee, as well as states such as Germany, France and Holland have officially declared India’s position to be unlawful.

2.India’s failure to prevent genocide and / or to punish the guilty is in open defiance of its obligations under the 1948 Genocide Convention. Tellingly, India has also filed a ‘reservation’ against that treaty preventing other states from taking legal action against it for breaches. Again, several states have termed that stance unlawful.

3.The breach of the Universal Declaration on Human Rights, which provides for freedom of religion and religious practice, caused by the scandal of Article 25 of the Indian constitution. That provides that, for the purposes of personal law, Sikhs are Hindus. For a so-called ‘secular’ constitutional document to enshrine such unashamed religious discrimination is indefensible yet, somehow, Indian politicians have flatly refused to alter it.

4.The failure to release political prisoners and prisoners of war under the Geneva Conventions. The armed conflict between India and the Sikhs in the 1980s and 1990s arose out of Indian aggression. The infamous 1984 Operation Bluestar, now acknowledged by the former Indian

Army chief VK Singh to have been a wrong ‘political’ act, triggered a terrible war which came to an end in 1995. Under the laws of war, prisoners of war are released, but India has shown no intent to calm the waters in Punjab by respecting these norms. Shockingly, Sikhs remain in prison despite even having completed their sentences; today Bhai Gurbaksh Singh sits on hunger strike to demand their release. The whole Sikh nation stands with him in his courageous struggle yet Indian leaders callously turn a blind eye.

5. The theft of Punjab’s precious river waters, in breach of internationally accepted riparian law. Self-determination, according to the 1966 Covenants on Human Rights, includes the right to control one’s natural resources. The illegal appropriation of this resource – which the new BJP Government hope to sanctify by its plans to inter-link rivers – has made Punjab a debt-ridden economic disaster. Farmer suicides in Punjab are an everyday occurrence. Billions of dollars’ worth of water have been looted from Punjab since 1947; the state now faces desertification and the wholesale annihilation of its agricultural base. The Sikhs demand retrospective reimbursement of this money and an immediate end to the loot.