Fresno, CA: The Indian consul of San Francisco’s effort to quash a proposed Fresno City Council resolution calling the massacre of thousands of Sikhs in 1984 a genocide has sparked a backlash among Valley Sikhs.

The activist group Sikhs For Justice lodged a complaint with the U.S. Department of State against the consul, Ambassador Venkatesan Ashok, for calling some Sikhs extremists in an interview with The Bee. And the Sikh Council of Central California banned two non-Sikh Indian community leaders – one of them a longtime peace activist – from future Sikh events for trying to derail the City Council’s genocide resolution.

Councilman Clint Olivier last week backed off a proposal to recognize the 1984 killings of thousands of Sikhs in India as a genocide. He had first proposed the resolution in January, but put it on hold just before it was scheduled to be voted on to do more research. The resolution has not been put back on the council schedule. 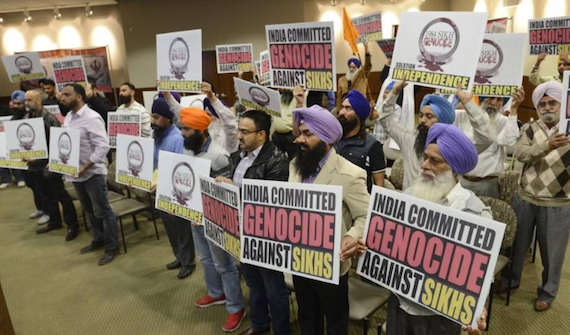 Members of the Sikh community hold up signs denouncing the mass killing of Sikh people in India in 1984, following a vote by the Kerman city council to formally acknowledge the violence as a genocide. CRAIG KOHLRUSS

Sudarshan Kapoor, a retired Fresno State professor and longtime peace activist, accompanied Ashok to meetings with council members on June 22 at City Hall. He said last week the Sikh genocide resolution would “sow the seeds of hatred, bitterness and animosity” and that the city shouldn’t get involved.

In 1984, Prime Minister Indira Gandhi was assassinated by her Sikh bodyguards. That was the catalyst for a massacre of thousands of Sikhs, followers of the world’s fifth-largest religion. The Indian government estimates 3,000 were killed, but Sikh advocates say it was closer to 30,000.

Sikhs are a minority group in India but make up the vast majority of Indians in the central San Joaquin Valley. Other cities in California, including Bakersfield and Kerman, have recognized the killings as a genocide.

Kapoor is one of two people named in the Sikh Council ban. The other is Central Unified School District Trustee Rama Dawar.

The ban resolution, which passed unanimously, says that Kapoor and Dawar attempted to undermine overwhelming support for the genocide resolution and “were involved in representing the interests of a foreign government in genocide-denial over the expressed interests of the Sikh community in Fresno.”

Both men and anyone who associates with them were banned from participation in Sikh Council affairs.

Dr. Sharnjit Purewal, secretary of the Sikh Council, which represents all temples in the Valley, said about 120 people showed up to the Saturday meeting from all over the Valley – much more than usual.

“It’s all the public outrage over this,” he said. “They come to our events. They come to our fairs. They present themselves as being part of our community and being concerned about our concerns as Sikhs, but then behind our backs they are working against us.”

In an email to Olivier that was copied to The Bee Wednesday evening, Kapoor expressed regret about the 1984 massacre in India, saying there was no justification for it. He added that he neither opposes nor supports Olivier’s Sikh genocide resolution.

The email included an earlier exchange with Olivier in which Kapoor expressed regret about the firestorm the issue had ignited, and voiced concerns about his personal safety and the harassment that Dawar was receiving.

In an email to The Bee, Dawar said he never opposed the genocide resolution, rather just said it is a foreign country’s issue.

On Jan. 13, Dawar sent Olivier and the rest of the council an email saying that Sikhs are “gems of the community” but that the genocide resolution would create controversy and divide the community.

“Considering the above mentioned it is urged that you must pull this item from the agenda …” his email said.

Dawar said he has since stayed away from the issue. He was not with Ashok during his meetings with council members and said he only shook hands with the consul during a meeting with community leaders the day before.

On Saturday, Dawar sent an email to council members withdrawing his email from January and saying he supports the genocide resolution.

“I don’t know why people have stood against me, talking against me, posting negative comments against me and much more,” he said this week.

Gurdeep Shergill, a host on Punjabi Radio USA AM 900, discussed the genocide resolution on his 9 a.m. show Saturday. The issue drew so much discussion that he extended his show by an hour and other hosts continued the conversation until 2 p.m.

He invited Dawar and Kapoor to the show, and Dawar attended. The show drew emotional comments from people angry about the consul’s visit. Shergill later attended the Sikh Council meeting.

Shergill said that rather than divide the Indian community, the effort against the genocide resolution further united those in favor of the resolution.

“The community is more united – Sikhs and non-Sikhs. Even some Armenian people were at the Sikh Council meeting. This resolution is about healing.”

The national activist group Sikhs for Justice filed a complaint Friday with the U.S. Department of State, saying the Indian consul Ashok abused his diplomatic status. The complaint says he violated Article 41.1 of the Vienna Convention on Diplomatic Relations of 1961, which says every diplomat has “a duty not to interfere in the internal affairs of the State.” They want him expelled.

In a statement Tuesday, Olivier said he has heard from dozens of people on both sides of the genocide-resolution issue.

“Please be patient as our local democratic process winds its way toward its conclusion,” he said. “There will be bumps in the road, but I have hope that the council will make the best decision for our community.”

Note: Above content was originally published by The Fresno Bee, under title: “Indian consul visit over Sikh genocide resolution creates backlash” by ANDREA CASTILLO, at source URL: http://www.fresnobee.com/news/local/article86774577.html. Acknowledging the rights of source publisher and the author, this writeup is reproduced as above for the information of readers/ visitors of the Sikh Siyasat News (SSN).